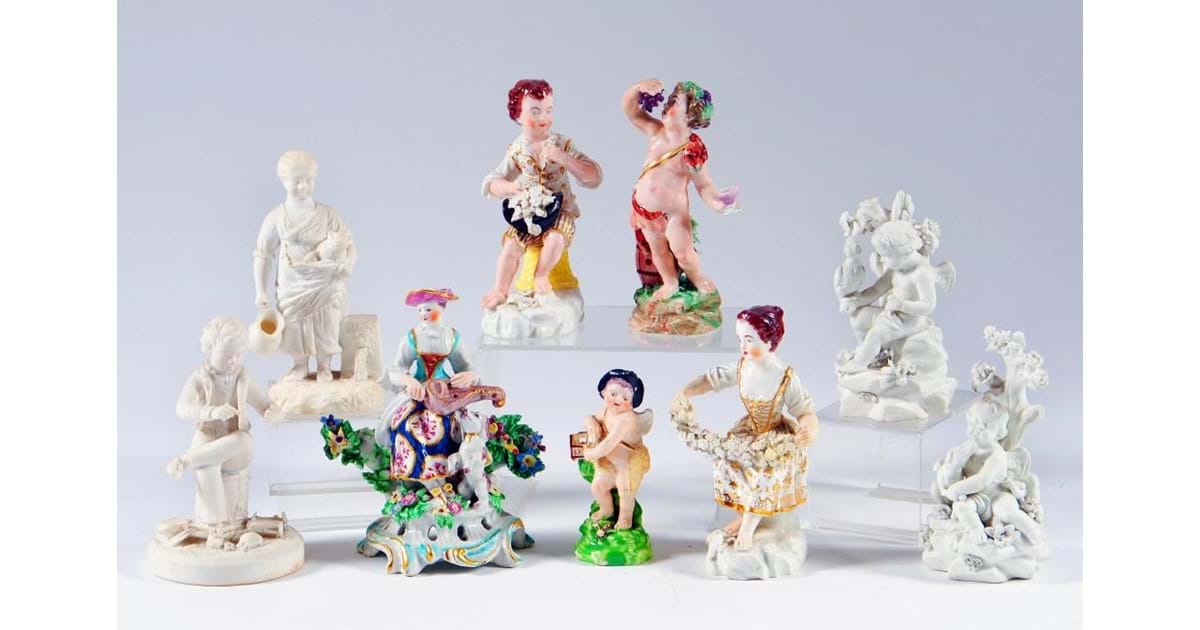 The sale total of £275,000 was satisfactory with 23% by lot bought in, much of it in the lower end lots of jewellery and pictures.  The sale started with ceramics and this commodity also had several missed lots at the lower end.  At the other end, the currently universal influence of Chinese money played a positive part.

This involved a Chinese blue and white ovoid jar decorated with figures 8 ½” high marked for the Kangxi reign.  The pre-sale estimate of £300 - £500 was left far behind at the final bid, made in the room by Yorkshire trade of £6,500.  The previous lot, a Chinese 16” porcelain charger did result in a successful Chinese bid at £1,050.

The other major influence on much of current prices is the bullion price of gold and silver.  The very first lot of the modern silver section was a four piece tea and coffee service dated 1938 of 63 ½ ozs which achieved £1,000.  Moving away from price per ounce, a rare lace back trefid spoon hallmarked for Hull, c.1680, maker Katherine Mangy, sold well at £3,100 as did two pairs of Edwardian suffragette hatpins marked Birmingham 1909 at £1,100.

The best lot within the bijouterie was a superb 18ct gold musical snuff box, early 19th century, and supplied with a repair bill dated 1909, which was held over from the large estate which produced several high prices in September.  In this instance the item was sold on the phone to a Continental buyer at £6,000.  Also in this section was a Continental silver snuff box imported in 1926 with enamelled scene of a ship near a lighthouse which found £950.

£1,000 was the price for each of three lots in the watch section, the first being a gents Vacheron Constantin “Classique”, the second an 18ct gold cased pocket watch by Waltham, and the third, a gents 9ct gold hunter with double Albert complete with a sovereign in the fob.  The best sovereign sold on its own was one dated 1968 with a loose pendant mount which found £310.

The jewellery section produced sixteen prices over £1000, including the second best price in the sale, for a glorious Edwardian diamond set bracelet of around 7.8 carats in total.  It was included in a consignment of jewellery entered by a lady who had owned it all for over thirty years, and “I’ve only given you things I’ve never worn”.  The bracelet had been working well over the decades and sold for £7,800.

Other jewellery prices included a diamond ring comprising a single stone surrounded by a circle of smaller stones totalling 2.8cts, which found £2,600, and an Art Deco diamond brooch pave set with borders of baguette sapphires, selling at £2,500.  An Edwardian two stone diamond pendant of 3.25cts reached £4,500, and a very handsome solitaire diamond with emerald cut stone of 2.5cts flanked by smaller baguettes went to top estimate at £7,000.

The afternoon session started with pictures which included the best price in the sale, a typical outside scene by Brian Shields or “Braaq”.  In this case it depicted an urban winter scene with children skating, and, furthermore, the blow up of part of the picture for the catalogue cover showed a notice inscribed “No Rubbish” as part of the scene.  This proved to be totally correct as the lot sold to a private buyer in the room at £14,000.  Another oil painting by Stanley Royle, a farmstead in Autumn Light, unsigned but well attributed, reached £5,250, after considerable pre-sale interest.

The Chinese influence cropped up again for the works of art where a pair of half tusks intricately carved and pierced with figures in landscapes, 8 ¾” high, went twelve times top estimate to sell for £6,000.  The next lot, a Japanese ivory and shibayama one piece okimono of a female figure 9 ½” high sold in the room for £1,200.  A 28” high bronze group by William Robert Colton “In the Springtime of Life” depicting two children on a rock sold for £3,800.

The most interesting clock in the sale was a mahogany cased table or bracket clock by Brockbanks, London, with twin barrel striking movement, 21” high, which was later identified as being from the Lord Leverhulme Collection at Thornton Manor, Rimington.  This sold in a sale on the premises in 1925 for £26.  The buyer who had completed the footwork for this research, found a label hidden inside the clock inscribed “TM369” which led the way to the discovery.

Within the furniture section the aspirations of sellers have been so contained by both media and pessimistic trade that only nine items in this area failed to sell.  A clean George III mahogany bureau bookcase sold for £1,250, a George III oak pot board dresser with delft rack (possibly a marriage) reached £1,150, and another oak dresser, this time more usefully with a full configuration of cupboards and drawers but a good size at 56” wide found £2,000.

Finally, in the subsection devoted to Mouseman Thompson and similar items, the heartiest and most sturdy piece was a writing table with thick kidney shaped top on trestle supports 61 ½” wide which sold for £1,150.