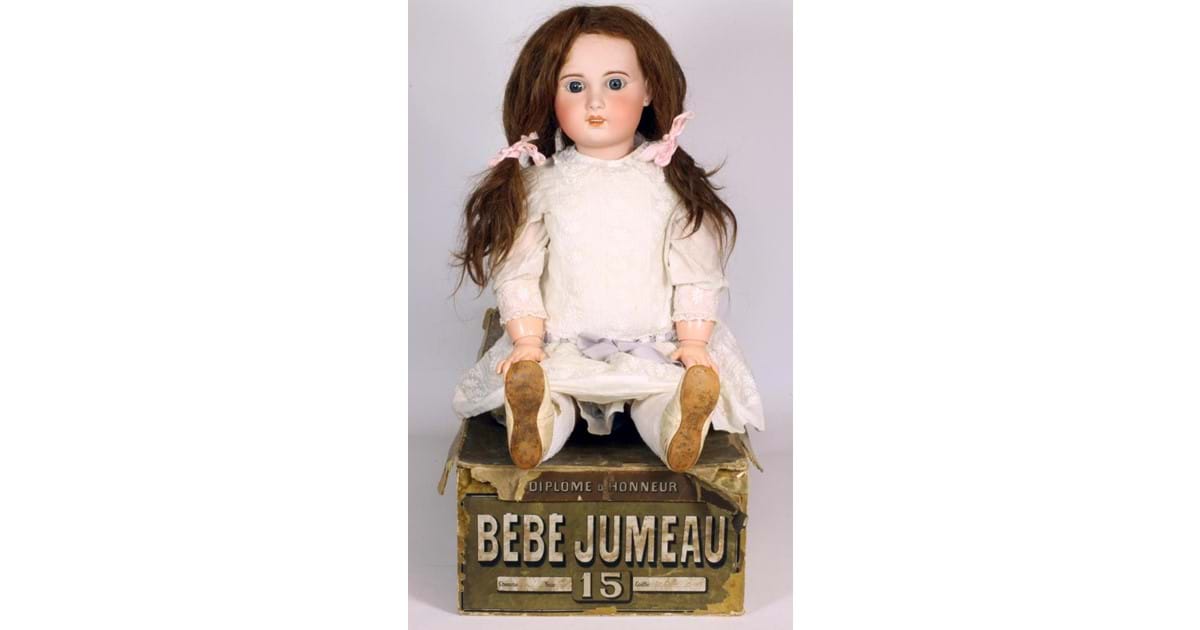 It was not so much surprise high prices that set the scene at Hartleys Spring Toy Sale in Ilkley on April 9th so much as the sheer determination of buyers to sweep the board of everything on offer.  With 541 lots to buy, only thirty four were left unsold, a failure rate of a mere 6%, with a total of nearly £61,000.

The sale started with dolls, teddies and Pelham puppets, and the star of the day, featured on the catalogue cover was a large size 15 Bebe Jumeau bisque head doll, 34” high, in original box which was bought by an Ilkley collector for £1400.

From the same source, a collector from the North West, was another rarity, a Chartrain fabric covered “Flapper” doll from Belgium which realised £400.  This section was the most popular with live internet buyers who snapped up 60% of the bought items as well as producing much of the underbidding.

At the end of the dolls was an offering of seventy five Pelham puppets from two separate sources arranged within 23 lots, a reminder of a large quantity entered a couple of years ago from a local collector.  The best price this time was £260 for two 1960’s “Katie Caterpillars” one in white, the other in pink.

The extended diecast collection of 140 lots was led by a rare Triang Spot-On No.0 Presentation Set of five vehicles which went to four times its bottom estimate at £600, and shortly after, a larger scale clockwork Shackletons Foden lorry in its box reached £380.

One of the most popular parts of this section is the selection of earlier playworn Dinky toys, and one lot of 27 cars and racers sold for £360.  In better condition were a series of six dealer boxes from the days when Dinky toys were not individually boxed but supplied to shops in boxes of six.  These were all offered with one of the “correct” models and in each case a selection of five others also mainly early examples to make up the box.  All sold well, the best price for a 25A wagon box and various contents being £380.

The end of the day was devoted to model railways and other scale model items, starting with OO gauge.  In this area, a Marklin 3-rail SK800 streamlined locomotive and tender with four bogie coaches and three Trix trucks sold well at £420, while a Trix Twin Southern Railways three car E.M.U., and a Trix two car Diesel Flyer, in only fair condition sold together at £250.

The O gauge offering included two Bassett-Lowke for Corgi live steam 2-6-0 Mogul locomotives both in mint condition, each realising £420.  The same price was achieved for a selection of mainly boxed Hornby trackside items and three trucks all in excellent condition, while a dozen more boxed trackside items such as lamp standards and signals, in only fair condition reached £440.

A collection of G scale items, the modern version of what used to be the old gauge One, included several locomotives mostly by Lehmann but also an Accucraft live steam saddle tank with electric remote control in new unsteamed condition which sold for £425.

The final part of the sale included a large Pocher 1/8 scale model of a Rolls Royce Phantom II Drop Head Sedance Coupe in stylish yellow and black, selling at £420, and a Bing gauge One stork leg live steam locomotive and tender with three Bing trucks, all c.1900, which seemed very reasonable at £460.  A Doll single cylinder spirit fired horizontal steam engine sold for £360, while a smaller but smarter example by Bing, c.1890 and with its original box, exceeded this at £420.

There was one more item in the sale worthy of a mention, unlike anything offered in these sales before.  The Calder Valley has latterly been portrayed by the BBC series “Happy Valley” as beset by murder, mayhem and mental breakdown.  An antidote for this was Professor Buster Balloon’s Tiny Tots Magic Roundabout, an amazing portable fairground ride powered by a pedal tricycle and created in the 1980s for use in charity functions.  Much comment and enthusiasm was generated prior to the sale as it dominated the back of the room, and in the end just two bidders resolved the impossible valuation exercise by taking it up to a price of £260.