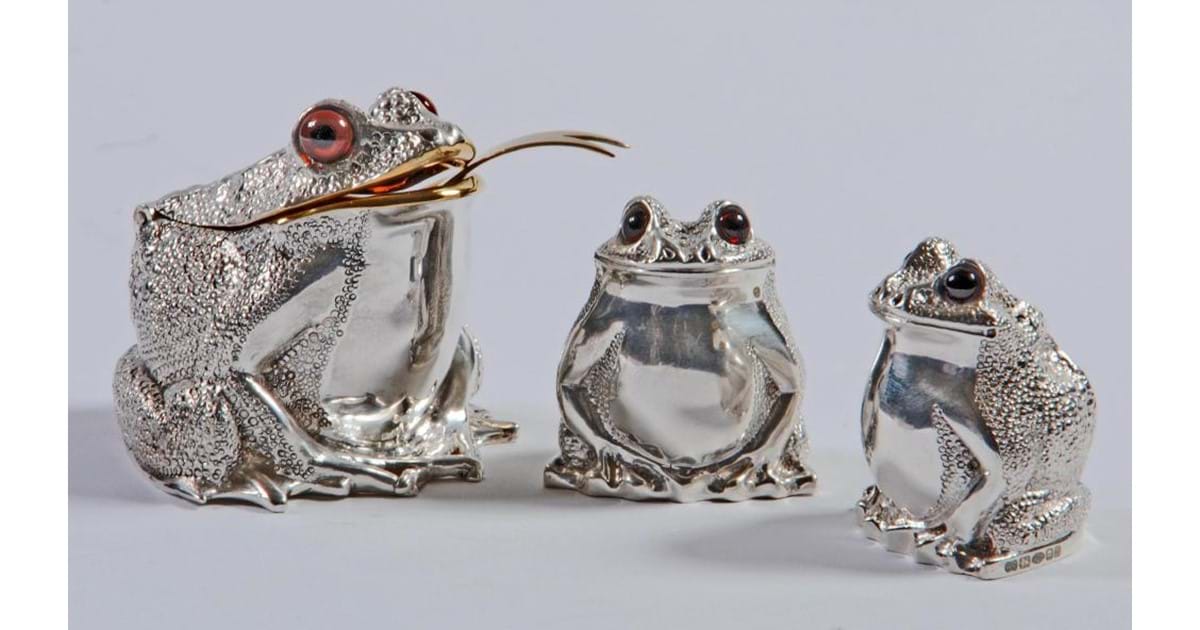 Just short of £200,000 was produced from Hartleys Winter Fine Sale in Ilkley, West Yorkshire on December 2nd.  This was achieved from 683 lots with only 16% bought in.

The sale started with a sprightly ceramics section, which included a good showing of Royal Worcester fruit decorated items including six tea plates selling at £900 and a set of six tea cups and saucers £1100.  A matched pair of 11” urn shaped vases painted by Ricketts dated 1912 and 1913 reached £1550 and a coffee pot found £700.

Silver and gold as precious metals have slipped slightly in their melt prices recently, which can of course challenge the agreed reserves of items entered for sale a few weeks ago.  It helps therefore if the item has intrinsic worth over and above the metal itself.  A four piece silver tea and coffee service dated 1857 doubled its lower estimate at £1100 (or £13 per ounce), a George III chamberstick of 1812 by Cattle & Barber sold for £950 (£61 per ounce) and a soup plate by Paul Storr dated London 1809 found £1250 (or £70 per ounce).  An Elizabeth II 18ct gold three piece medallion set of 1964 to commemorate the death of Winston Churchill just exceeded the melt price with a hammer bid of £1180.

This particular sale each year features bijouterie, much of it in silver, and this produced some good prices.  A cruet in the form of three frogs reached £1550, a silver pepperette in the form of an otter dated 1895 found £1350, and a very stylish French art deco style silver and guilloche enamel cigarette case, incorporating a floral filigree central panel sold for £1100.

The final part of the morning session also appropriate for this time of year was devoted to jewellery.  One of the best prices in the sale was achieved for a diamond three stone ring which as a very late entry did not reach the catalogue.  It weighed a total of 2.8 carats of diamonds and sold for £3800.  Other jewellery prices included an art deco ruby and diamond plaque ring £1000, a George I gold mourning ring, dated 1721 £1100, a five stone diamond ring £1200, a diamond eternity ring set with seventeen stones £1200, and a late 20th century diamond set gold chain necklace £1550.

One surprise in this area was a string of butterscotch coloured amber beads which sold together with another string of amber beads, two strings of coral and a pair of earrings.  This achieved a six times bottom estimate of £900.

The paintings section was probably the hardest one to dispose of, with a buy-in rate more than double the average for the whole sale.  There were however some noteworthy results.  The highest price among the prints was “The Lonely House”, a coloured off-set lithograph by L.S. Lowry which sold for £2900, while within the oil paintings a work by Charles Spencelayh “Just Ripe”, a study of a young girl eating strawberries, went after the sale at £3500.

The Yorkshire artists tended to be the most productive, and there were several examples by local Herbert Royle.  These included £2100 for “Bluebell Woods, Nesfield”, £2400 for “Haymaking” and £1450 for “Snow Scene with Shepherd and Flock”.  Geoffrey W. Birks provided two entries, both industrial scenes with figures which sold well at £1250 and £1300.  Of various works by Stuart Walton, the best was a Leeds Street Scene with the inevitable Street Lamp, which found £1050.  Finally, every sale in recent years has included something by Brian Shields (“Braaq”), and this time an early and somewhat untypical snow scene with figures sold for £4000.

Amongst the works of art, the only really outstanding lot was a Chinese silk embroidered panel 25” by 26” in a later frame, which generated much presale interest and finally sold to one of the telephone bidders at a ten times upper estimate figure of £1900.

Clocks presented a wide variety to purchasers, and the penultimate lot proved to produce the best result.  This was a late 17th century longcase by Jacobus Goubert with attractive marquetry inlaid walnut case.  In spite of the probability of a marriage between movement and case, this lot still achieved £2800.  Also in the section were a French black slate mystery clock with figural surmount of Venus and Cupid supporting the pendulum which found £1600, a large Victorian oak and gilt metal mounted table clock selling for £1250, and a French Louis XV style red Boulle and gilt metal mantel clock, sold at £950.

Finally, the furniture section started with the 20th century, including a Robert Thompson “Mouseman” rocking elbow chair at £1000, and a “Mouseman” bedside cabinet at £950.  Four early 19th century yew Windsor armchairs with pierced and roundel splats, attributed to the Prior Family of Middlesex reached £1850, and a mid 18th century blanket chest on stand quarter veneered in rosewood with yew banding tripled its upper estimate to find £1600.

The last three lots in the sale all came directly from Bramham Park, Near Wetherby and comprised three large room screens.  The first was a Chinese six fold black lacquered screen with scene painted linen inserts, which found £1450, the second was also a Chinese six fold, but this time solid wood with lacquered gilt scenes and figures on both sides, and very heavy, and this rose to £1200.  Finally an 18th century embossed leather four fold screen gilded with flowers and scrolls finished the sale with the same price of £1200.