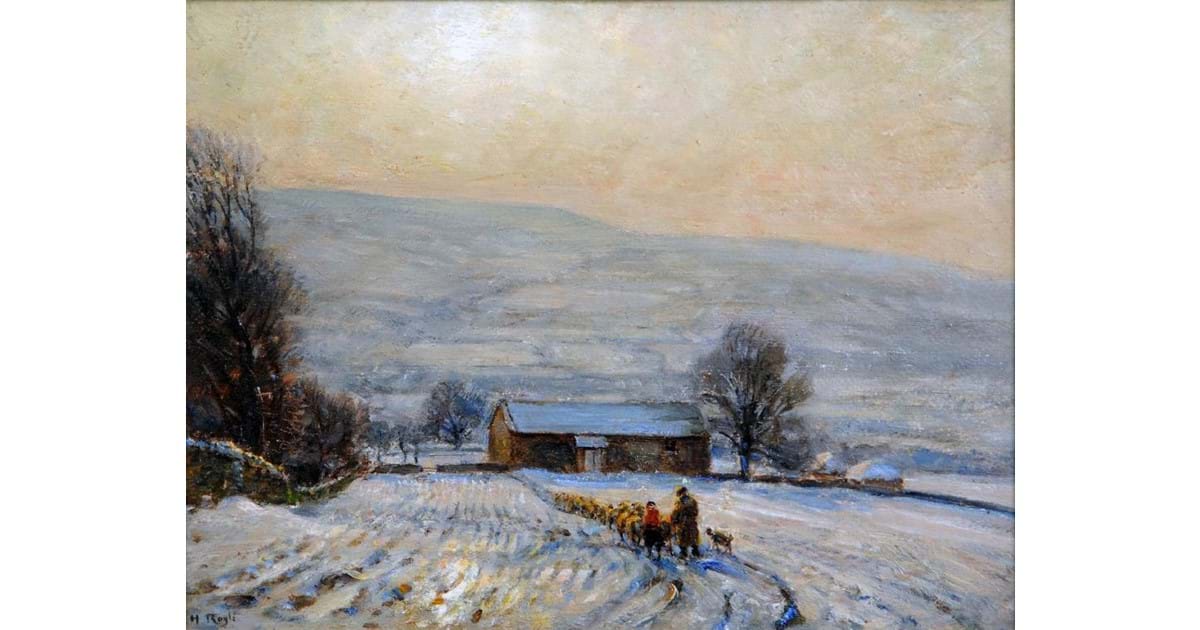 In spite of overnight snow Hartleys Spring Sale in Ilkley on April 4th was definitely like the Curates egg, (very good in parts).  Although the unsold rate of 24 % by lot was higher than is usually expected at these rooms, some excellent prices in most areas ensured a total of £308,000 for eight hundred lots which was comfortably above expectations.

The start of the day comprised ceramics, a smaller section than usual, but included a 12 ½” Royal Worcester vase painted with fruit by Freeman, dated 1969, which doubled expectations at £1,400.  A Wedgwood Fairyland lustre bowl by Daisy Makeig Jones went to a mid estimate £2,400, and, the auctioneer’s favourite, an 18th century documentary pearlware punch bowl reached £580.

Silver by contrast was a larger section than normal and with the bullion price slipping slightly from its peak, threatened to be a somewhat muted affair as some trade buyers chose to alternate their bids with each other rather than compete.  However, extensive commission bids on the book ensured that results landed as expected.

Gentlemen and Rolex watches continue to be a dependable combination and three examples sold well here.  An Oyster Perpetual stainless steel example sold for £3,500, a gents Prima 9ct gold watch on later bracelet with work to be done, exceeded expectations at £1,200, as did an Oyster Perpetual Explorer watch.  In this case it had the added provenance of explorer Sir Wally Herbert and was engraved “Alan Gill North Pole 6th April 1969”, and sold for £5,200.

Jewellery tends to be more speculative with a higher buy-in rate but still a useful crop of four figure prices.  Three solitaire diamond rings with stone sizes varying between 1.08 and 2.0 carats reached £3,800, £3,000 and £3,400, while a stunning pair of diamond drop earrings seemed reasonable at £1,800.

Pictures for once produced a buy-in rate worse than the jewellery although the majority of failures were at the lower end of the price spectrum.  The total of the picture section was very similar to its bottom estimate total thanks to several lots going well above expectations.

A pencil drawing by L S Lowry sold around expectations at £3,600, as did a fine watercolour View of Dublin by Rose Maynard Barton at £4,300.

Two excellent local oils by Herbert Royle sold well, “Simon’s Seat from Woodend Farm” reached £4,600, and a smaller Snow Scene “High Laithe Langbar” £4,800, while a typical View of the Wharfe at Bolton Woods by William Mellor found £3,800.  The big surprise was reserved for a large oil by Kenneth Jackson entitled “The Railway Children, Haworth”, and was a highly detailed (almost photographic) View of Haworth Main Street with a crowd of locals watching the filming taking place in 1970.  850 limited edition prints of this work exist mainly in local hands but the original after an extended bidding battle sold for £10,500, or three and a half times its lower estimate.

The works of art section included a run of seventy eight Chinese and Russian bond certificates offered in six lots.  The Chinese examples produced the main interest with two lots finding £1,500 and £1,000.  A pair of Regency chenille and silkwork pictures depicting children in garden settings reached £1,700.

The spring sale always includes a special section devoted to weapons and this time a selection of pistols and long guns produced considerable interest.  At the top was a superb cannon barrelled flintlock pistol c.1760 by I Smith, London, bearing the crest of the local Vavasour family which tripled its estimate at £3,800.  A pair of slightly older 22 bore flintlock pistols by T Richards, exceeded this at £4,600, while the best edged weapon price was £1,650 paid for a Prussian Model 1735 Pattern Dragoon sword dated 1797.

For once, the furniture section performed well compared to the rest of the sale, producing fourteen four figure prices.  The top of the range and the best price in the sale related to a Georgian mahogany library bookcase with four doors all with original glazing 10’6” wide overall, which sold on the telephone at £16,000.  Another large piece was a late Victorian ornately carved dark oak table 11ft long which found £4,700.

A set of five 19th century yew wood Windsor armchairs doubled their estimate at £2,400, and even a pair of Louis XVI style commodes dated around 1972 kept up the pace at £3,600.

The final section of the sale was devoted to Mouseman and similar Yorkshire furniture.  It illustrated strongly how the products of Robert Thompson’s workshop from before the war with good maintenance in the meantime deserve the best prices.  The contents of a bedroom commissioned in the 1930’s comprised a double bedstead at £1,200, a small blanket box at £2,600, a 48” wardrobe at £3,100, a dressing table and stool at £6,200, and a tallboy at £6,000.  From elsewhere, a 48” high dresser realised £3,800, and even a bespoke CD storage unit found £840.  Let us hope CDs stay in demand for a little while longer.