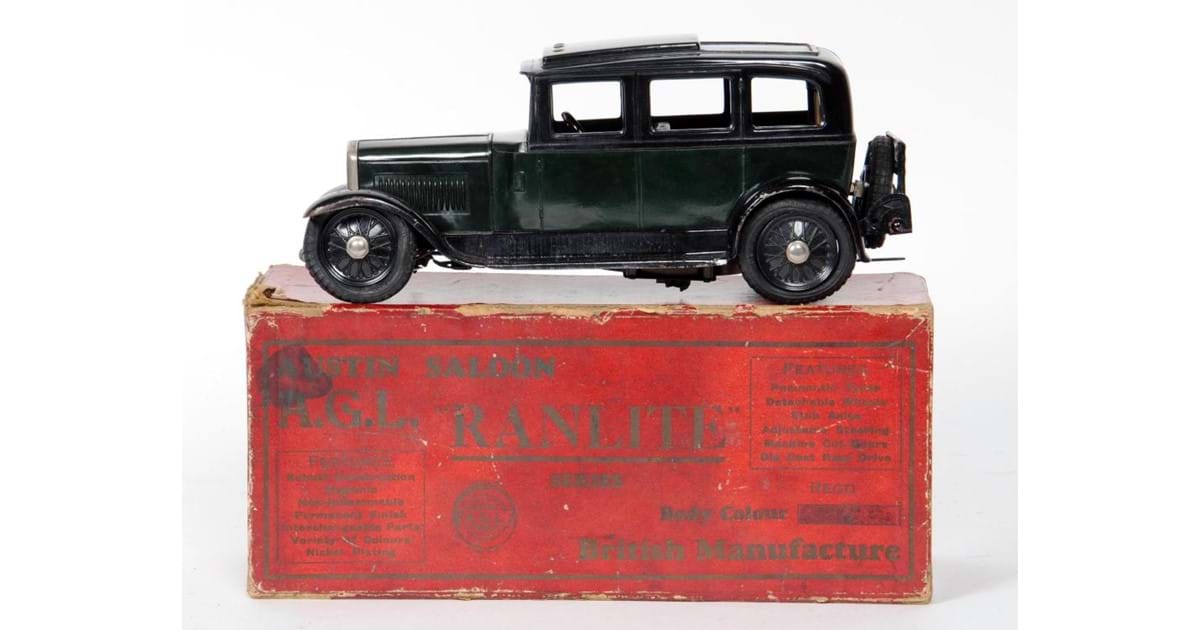 The best price achieved was £1550 for a rare Lehmann tin plate motor cyclist “Halloh 683” manufactured c.1908 and in excellent condition.  Other tinplate items included two other Lehmann models, both in their original boxes, a “Balky Mule” selling at £290 and a “Performing Sea Lion” at £230.

The sale started with dolls and teddies, and a large showing of bisque head dolls from the early 1900s included a Jumeau Bebe 14 ½” high which sold for £380, a large Simon and Halbig 34” high £460, and a Kestner 151 character boy doll 18 ½” high £420.  A rare two faced wax head doll with pull-string cry mechanism reached £320.  The best soft toy item was a composite lot of two pairs of polar bears “Brumas and Ivy”, with associated contemporary literature which found £330.

Within this area was a single owner collection of ninety four Pelham puppets offered in 27 lots which represented the third quarter of a whole Skipton estate, the executors have been working through since October 2010.  This time nearly another £3000 was added to the rolling total with the best single price being £500 for a pre 1950 20” Golliwog puppet.  The final tranche should be in place for the October sale.

Another single owner collection was a twenty six lot group of large Star Wars figures by Sideshow Collectibles and Code 3 Collectibles, all either eight years old or less, which produced an enthusiastic total of over £4,100.

Rather more traditional, and certainly rare was a fine looking pre war Ranlite Bakelite Austin Saloon in its original box.  Condition of bodywork was excellent, but there was damage to the front axel and winding gear, so the eventual price of £520 appeared surprisingly good.  A series of totally mint Mamod live steam models included a Millenium double decker bus selling at £280, and two interesting advertising items were a Stephens Ink enamelled tin thermometer at £210 and a National Benzole glass petrol pump light shade at £270.

The large section of metal figures was mainly either playworn or later boxed stock but one lot which was spotted included two Britains “Racing Colours of Famous Owners”, two boxed horses and jockeys in relatively good original condition.  The total for the lot including four other items of minor value was £250.

Diecast again was plentiful with the main individual prices going for older boxed Dinkies.  A 903 Foden flat truck, graded G-E, reached £230 and a 514 Guy Slumberland Van and 514 Guy Weetabix Van, both only P-F, each found £220.  More rare were two Britains Fordson Major tractors (one boxed) and a Farm Trailer which together found £320 and a Lesney-Moko Prime Mover 13 ½” long, boxed in good to excellent condition which sold for £380.

The model railway offering was more modest than normal and the best OO gauge price was £270 for a rare but not particularly popular Hornby live steam Mallard train set.  Within the O gauge was a Bassett-Lowke electric 4-6-0 Royal Scot locomotive and tender which was withdrawn in October at £320 but this time sold successfully at £425.

Larger scale items included a Stuart Turner No 1 stationary steam engine at £260, and two Hornby 3 1/2” gauge live steam Stephenson rockets, one with two extra coaches selling for £260 and another with three extra coaches at £320.