Spring & The Promise of Life 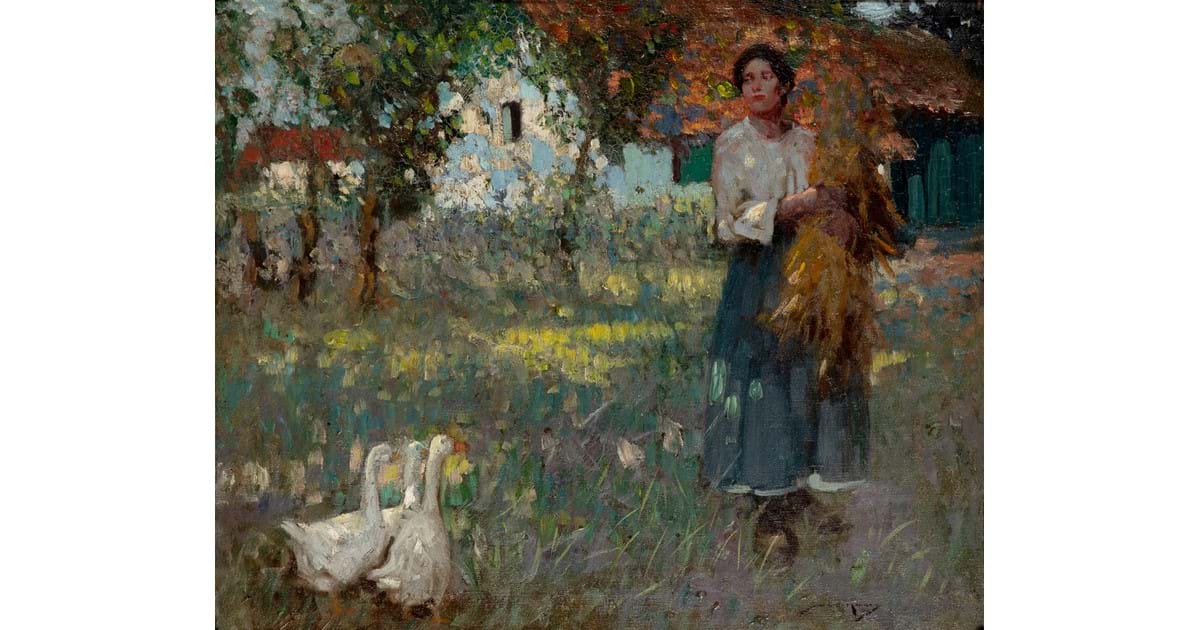 The March 24th Fine Sale marked the last of our flagship sales to fall within a Covid restricted time and although the market has been “up” since Covid first hit our shores, here at Hartleys we are more than looking forward to welcoming our clients back into the room and feel the buzz of an auction which really makes this job special.

The sale started with 129 lots of ceramics and glass, bolstered by a large single owner collection of Royal Dux. Typically this started with the oriental lots, with Chinese items selling as strongly as ever, but the best price coming from a Japanese Satsuma earthenware vase which eagerly skipped past its estimate to finish at a hammer total of £900. The best of the modern ceramics came from a pair of Moorcroft vases potted in 1995 fetching £680, and although it is so typical these days to talk of how traditional ceramics have fallen in recent years, on the 24th classical pieces ended up stealing the show with a pair of still life plaques by Clermont Fine China rocketing to £1,100, and two pairs of Royal Worcester ewers painted with herons and highland cows making £1,950 and £2,500 respectively. Not the highest price, but the biggest treat from the ceramic section came from a rare Staffordshire Pottery dame school arbour group, circa 1825, depicting children in school (a rare sight these days). Although it was carrying some thorough and obvious damage, it still exceeded the £350-£500 estimate to reach £1,750.

We then rumbled into the plate and silver section, starting with a small offering of plated items led by an Edward Spencer candlestick in the Arts & Crafts style jumping up to £320. Within the 20th century silver lots two silver tea services fetched £820 each, and a truly beautiful Georg Jensen raised tazza by George Stockwell pushed past its top estimate to peak the section at £3,800. Of the antique silver some interesting prices were found from three items of 18th century silver, with a George III silver plate making £420 at the top of its estimate, a small Russian beaker from 1778 over doubling its bottom estimate at £320, and a tiny George II 2oz silver sugar pail making £320.

Within the coins, watches and jewellery section things started strongly with the sovereigns selling as well as ever with the rise of bullion prices seen throughout Covid. A George V 9ct triple sovereign holder made £1,150, a 9ct double link bracelet made £900 and a wonderful 18k gold Berger & Co. Yokohama pocket watch hopped up to an impressive £1,300. The top jewellery price came from an unusual bicolour hinged diamond ring that sold at £1,950.

On to my favourite section, the Works of Art which covers a myriad of fun which does not fit into any of the regular categories. In this section we saw our last go at ivory, as with a ban imminent we shall see items of high historic and cultural value struck from the market by May this year. The best of the Japanese ivory came with a 2 ¼” Meiji period okimono netsuke of a ratcatcher signed Itsumin, which found a hammer price of £2,000. But the best ivory price came from a 19th century Indian box that left its estimate in the dust to find £4,200 - the Anglo Indian market seemingly going from strength to strength. Akin to our January Fine Sale we had further interest in the multiple lots of chess pieces presented, with a Victorian Jacques Staunton set topping the group at £1,350. Other successes were seen when a pair of enamel on copper portraits in the manner of Henry Bone of Henry VIII and King Edward VI brushed past their top estimate to fetch £1,400, and a beautiful carved marble group by Pio Fedi bearing an inscription from Dante reached it's estimate of £8,000. But the biggest surprise of the section came from an antique violin with no defined maker which (with private and trade interest) struck a note at £3,800.

Of our twice yearly Fine Sale selection of Arms, Militaria & Field Sports, only one item was unsold. The continent of Africa was well represented as a total of £530 was found for two Zulu Iklwa spears with a patina landing them in the 19th century, and £700 was achieved for two fantastic Sudanese Bejan shields. £540 each was found from a neat little .30 Smith & Wesson 6 shot revolver and a 1796 type cavalry officer’s sword thought to be Yeomanry. A blow was struck with the Fijian Cula-Cula fighting club which reached £800 and the height of the section was reached with an interesting set of three Victorian medals; headed by a China War Medal and Pegu Medal that over doubled the top estimate to gain £1,150. The section ended with taxidermy proving popular and seeing a fairly weathered Giraffe gain £1,050; much to the delight of the owner who was going to sell it to a neighbour for £60.

With this we moved onto the picture section leading with the prints, through the watercolours and onto the oils. The start of the section saw a signed print by fellow Bradfordian and local artist David Hockney “The Road to York through Sledmere", exceed expectations to reach £850. A pair of Italian coastal oils by Luca Albino leaped up to their estimate of £800, and Yorkshire artist William Mellor did us proud with £900 for an atmospheric oil of Helks Ghyll Near Pateley Bridge and £1,300 for a pair depicting similar luscious green river views. But the highest prices of the section and sale were found in two paintings which held the attention of the market from the moment the sale went live almost a month earlier. A girl feeding geese by William Lee Hankey excellently executed across the canvas, peaked at £11,000, whilst a lady relaxing in the shade by Algernon Mayow Talmage, a painting which has already had its 15minutes of fame back in 2008 on The Antiques Roadshow, breathed the essence of summer with its dappled sunlight and left the gavel thundering down at £13,500.

The clocks and furniture section then finished the sale seeing the usual strength from Robert Thompson, with three Mouseman lots comfortably beating their bottom estimates with £1,900 for a dining table, £2,600 for a set of four chairs and £2,800 for a sideboard. More from 20th century design and its furniture saw £1,400 for a Niels Otto Moller retro dining suite and £1,500 for a very well used Alvar Aalto dining table. Of the more traditional lots, we gained £1,250 from a smart set of seven Georgian dining chairs, a whopping £1,050 for a 19th century Georgian style wing back armchair and £1,500 for a fine Victorian Louis XV style birds eye maple bureau plat. The best of the clocks came with a stylish and highly musical Kieninger skeleton clock which chimed in at £700.

All in all it was a very successful sale, with a total just shy of £200,000; well above what we were expecting as our bottom estimate. It is wonderful to leave the Covid months with a lot of positivity and as we toast the return of Spring, we look forward to the promise of returning clients, friends and life back at the auction house.