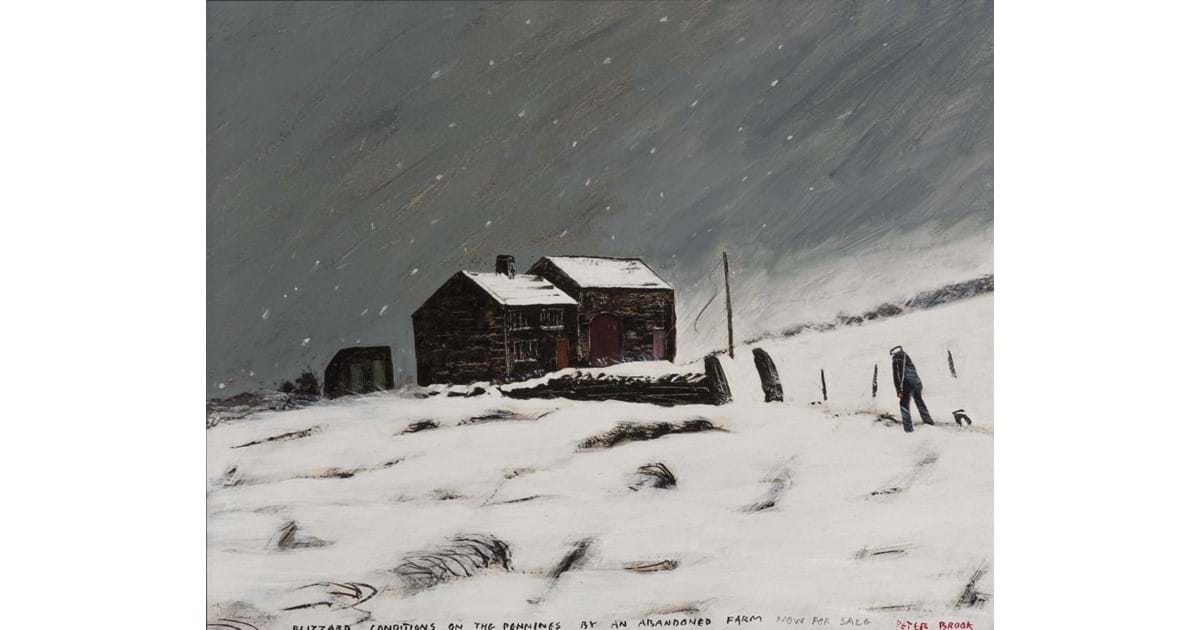 Just short of £250,000 was realised for an interesting and varied spring Fine Sale at Hartleys in Ilkley on March 20th.  There were high spots throughout the day but the pictures were the richest area for results.

Amongst the general watercolours were a pen, ink and wash study of an Arabian Scholar by Edward Bawden inscribed “Iraq 1944” selling at £2400, a typical Cumbrian Scene by William Heaton Cooper at £1300 and a small pair of red chalk portraits by Augustus John which found £2900.

Within the oil paintings, a pair of Street Scenes by Johannes Spohler sold for £1850, a very stylish full length portrait of an Edwardian lady by Richard Jack reached £1900, and another female portrait described as being a follower of Sir Peter Lely defied the estimate to sell for £5200.

The Yorkshire picture section produced another eight four figure prices with two names standing out.  The first was Peter Brook with three examples, the top price being for a typical bleak snow scene which sold generously at £6800.  Another in his earlier style entitled “Old Farm” found £3500 while the most painterly was “Street Scene, Brighouse” the least obviously by Brook, executed in his early 30s, selling for £1700.

The other artist was Brian Shields or “Braaq” who often included “Ann” within his signature, the sister who died at an early age.  Doubtless this was the reason for keen private interest in the painting on offer, being a portrait of Ann entitled “Me Mam’s Slingbacks”, an essential addition to any serious collection of his works.  This sold after a battle between phone and internet at £12000, which as the lot only measured 10” by 8” must be some kind of record calculated per square inch.

The sale started with a small ceramics section which included a massive Chinese porcelain jardinière selling at £1600, a rural English slipware dish at £1250, and a beautifully painted KPM porcelain plaque of the Madonna and Child with St Sebastian which deserved its final bid of £2200.  The best silver price was £1900 for a silver and stainless table service for eight place settings housed in its own oak canteen.

In the jewellery section of 80 lots, four items particularly stood out.  They were a typical three stone diamond ring of around 2.8cts from a Halifax probate selling for £3800, an eye-catching sapphire and diamond cluster ring of good pale colour £2200, a most unusual diamond ring with wide pave cut shoulders £3400, and a Chopard “floating diamond” heart shaped pendant £3600.

The works of art section included early on an interesting set of three bronze cricketing figures by Joseph Durham, exhibited in 1864 at the R.A., which sold predictably for £3800.  A massive Carrara marble baroque bust of a nobleman rose to £1650, and a small collection of Hong Kong postage stamps reached £1000.  One surprise result was a modest looking Oriental cloisonné vase decorated with birds and insects amongst flowers which defied its estimate of £100-£150 to achieve £6000.

The twice yearly offering of militaria took up 160 lots, and was dominated by 67 of them forming a large collection of bayonets and miniatures put together by Roger Evans (1943-2016).  This section was mainly modest in values but one lot worth a mention was a Private Purchase Fairbairn Sykes dagger which sold for £1300.

The final part of the sale was devoted to clocks and furniture and showed once again how auctioneers and sellers alike are now well trained in modest expectations.  Nevertheless a handsome ebonised bracket clock by J. Herring, London exceeded its top estimate at £3800, an Art Deco Macassar ebony dining table and six chairs achieved £3000, a Gothic Revival oak writing table in the manner of Pugin found £950, and a Liberty & Co Arts and Crafts oak dresser reached its top estimate of £1200.

Finally, a totally traditional panelled pine lambing chair, its worn down rockers showing how many decades it must have rocked on a hard stone floor, easily exceeded its estimate to find £900