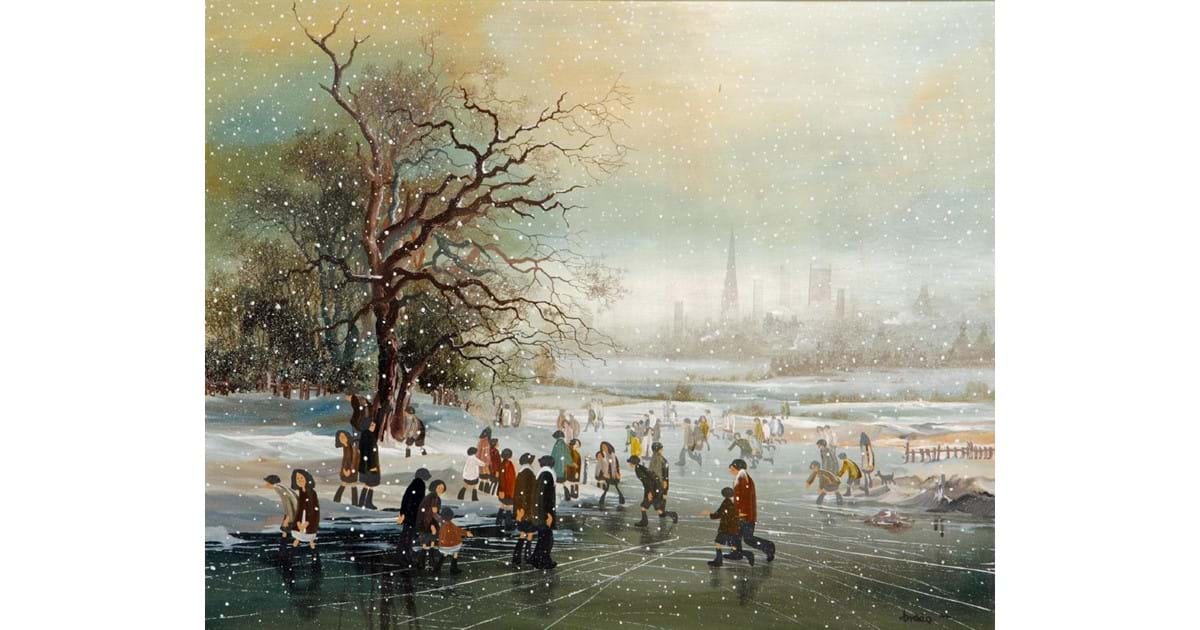 At Hartleys sale in Ilkley on December 12th, items either sold, often very well, or there was virtually no interest at all.  The resultant total of £276,000 included 25% by lot bought in, but also produced some notable results.

The Yorkshire painter Brian Shields (1951-1997) who signed himself “Braaq” has cropped up in these rooms frequently in recent years.  This time there were four examples of his work on offer, the highest price being £14,000 for a Snow Scene with figures skating.  Next came a football match at £11,500, then an Industrial Town Scene at £8,500, and finally a less attractive but still typical Park Scene £3,800.

Other more established Yorkshire artists who achieved over four figures included an oil painted View of Dene Farm, Nesfield, Near Ilkley by Herbert Royle selling for £3,200, and a screen print “Man on Horse” by Dame Elizabeth Frink £2,500.

The latter item was the best of a group of forty six mainly abstract prints and paintings forming a Leeds Corporate Collection, many of which were Eastern European in origin and only one third of which found buyers somewhat skewing the picture section’s bowling average.  Also sold from this group were an oil by Tadeusz Domanik “Landscape” at £1,400 and another by Jindra Husarikova “Levitation” which found £700.

Elsewhere a screen print view of Wymondham Abbey, Norfolk by John Piper reached £1,200, an excellent set of four naval miniatures, one dated 1837 including Lord Nelson £1,450, a rural scene oil by William Kay Blacklock £1,550, and an 18th century English School portrait of a lady £1,150.

The area which achieved the best selling rate was silver, with only five lots failing out of 145 in all.  The bullion metal price has slid up since the estimates were fixed and careful calculation of reserves helped ensure the result.  Perhaps the most satisfying price was £1,350 for a 4 ¼” long model of a walking fox dated 1969 which factoring in the buyer’s premium produced £61 per ounce.  Other prices included a composite four piece tea and coffee service of 1828 and 79ozs which found £1,700 and a mid 20th century Peruvian cafe-au-lait set of six pieces on a 24” tray, totalling 166ozs which sold for £2,400.

Following this came a section of bijouterie with more little pieces of silver and gold.  Included in this area were a Continental silver and guilloche enamel box and cover at £750, a Russian silver cigar case at £680, and a jade letter opener, possibly Russian set with gold, gems and semi precious stones which sold for £1,500.

The polarised bidding was present in the sale from the start, with a modern Royal Worcester pot pourri decorated in fruit by Freeman going at a mid estimate £1,300, while two Chinese items went to several times estimate, comprising a Kangxi style jar at £750 and a 20th century baluster vase at £1,450.

There was a suggestion that unusually this year, the market had slackened off by late November, when normally it would run much nearer Christmas.  This was nowhere more obvious than in the jewellery where the total proceeds of the section were only half of the bottom estimate total.  Nevertheless there were eighteen prices in four figures, including a gentleman’s top wind 18ct gold pocket watch of 1908 selling for £1,250, a solitaire diamond ring of 2.5cts with baguette shoulders reaching £4,600, a diamond multi stone dress ring £2,800, a three stone diamond ring of 3cts £4,400 and a diamond necklace formed of thirty flower head clusters selling for £4,500.

The works of art section in the afternoon included an interesting single owner collection of bronzes.  They featured two charming studies of Neopolitan urchins by Guiseppe Renda, one playing the cymbals selling at £1,050, the other running, price at £1,150.  A larger piece, a 24” Art Nouveau female nude by Carl Binder found £2,500.  A Black Forest carved wood bear jardinière modelled walking on all fours sold well at £1,350.  The major excitement however was reserved for a delightful Japanese Shibayama lacquered tray, Meiji period, 13 ½” wide, with complex flower, animal and figure decoration in ivory and mother of pearl.  The final bid for this was a nine times bottom estimate figure of £5,200.

Finally, the furniture ended up with a good selling rate of 90%, thanks to a severe mopping up process of after sales.  An unusual hook and spike wall clock by Benjamin Lamprey of Brackley with 30 hour bird cage movement quadrupled its estimate, selling for £1,650.  An inlaid breakfront wardrobe reached £1,250, a substantial carved rosewood centre table £1,200, and a carved and gilded console table with painted marble top £1,150.  Two items which failed to find a buyer in June found that now their time had arrived.  A large Victorian mahogany partners’ desk by Edwards and Roberts, which stuck fast at £1,450 then, now sold at £1,800.  Similarly, a Georgian mahogany twin pedestal dining table 112” long, which had stopped at £725, now took off at £2,100.

One lot that needed just the one outing however was a composite set of six ash and elm Windsor chairs with low backs and “H” understretchers which exceeded expectations at £3,200.