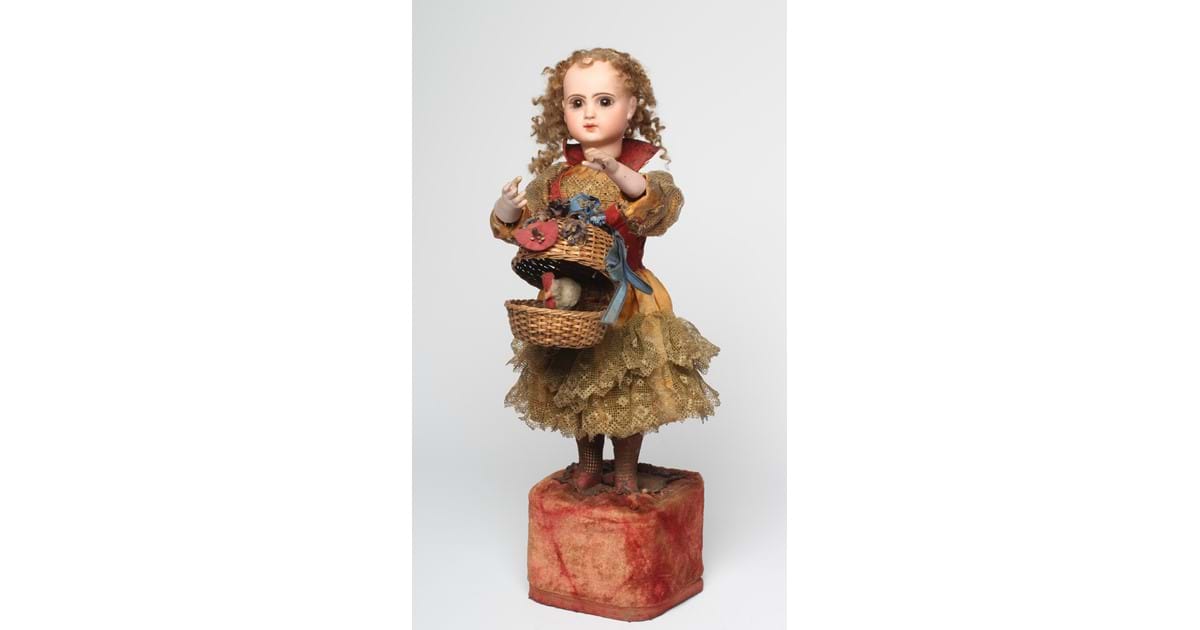 The second major international sale of 2022 is taken on by our famous Toy & Collectors sale. This has been a staple of our auction calendar since 1989, with the late Andrew Hartley driving true passion into the sale and myself and Simon Greenwood taking the baton wholeheartedly since we lost him in 2020. Our offering this April is typical to many previous Toy Sales, though remarkably about 50% larger than normal with 928 lots up for auction.

We started as ever with a large and good quality doll and teddy section, ranging from miniature dolls houses dolls, to almost life size models. Lot 81 was a remarkable collection of Victorian bone & ivory doll’s house furniture, it reached towards the upper end of its estimate at £560, which although was my auctioneering goal, I was still left sad.  You see, new laws on antique ivory are coming in June which will leave the market without such beautiful pieces. The legislation is of course there with good intent and right reason, but the length and breadth of historic treasures we will lose is hard to comprehend.  Lot 14 was a beautiful little Tete Jumeau bisque head doll with piercing eyes and a hammer total of £1,200, other French comrades of hers also rang in with success, seeing £1,250 for a large and unnamed bisque head doll, £1,700 for lot 19 a rare and well-dressed Bru Jne. & Cie bisque socket head doll, and £1,900 (over doubling the top estimate) for an Eden Bebe even with a hairline crack from her right eye.  The best of the German dolls was seen with lot 125 a large Jules Nicholas Steiner socket head doll, who although held back by chips to her eyes, still managed an impressive £1,400. But running away with the section and holding the best price across the whole sale was lot 4, an amazing and extremely rare Leopold Lambert automaton boasting what appears to be a Jumeau head and a fully functioning mechanical system; which given she was made circa 1890 is remarkable. The lot made £3,200, which although was double the top estimate, it did not come as any surprise with two of my three doll reference books sporting very similar dolls by the same manufacturer on their front covers.

The teddies of the section sold well with a very high sale rate, the two highlights of the section were £440 for a pre-war Farnell bear called “Archie” and £1,000 for a possibly Steiff bear with long plush.

The miscellaneous toy section always holds the largest array of intrigue, this year being no different and holding a large live steam section collected 407miles away in Penzance, this collection sold with 100% success with prices landing in or above the estimate and the collection standing around £2,500 in total – the best of the group being a Bing spirit fired overtype single cylinder steam engine which reached the top estimate at £160. The “steam power” continued with a (locally made) early Sutcliffe Put-put steam boat which doubled the top estimate to make £290, no surprise with its remarkable condition and original box. Other notable results came with a late 9 cup slot machine that made £270, £340 for four 1960-70s slot cars and £500 for a collection of similar period slot car spares.

After the miscellaneous section we marched into the figures with a large and good quality offering of Britains soldiers brought in (in the main) from two single owner collections. Early in the section we saw £220 for a Britains 1450 Royal Army Medical Corps WW1 horse drawn wagon, a surprise £280 for an unboxed Britains Royal Marines band, £220 for a brilliant boxed set of four Britains 2017 Ski Troops and £380 for Britains Life Guards on horseback. The highest two prices of the section were seen with £400 for some relatively modern production Napoleonic soldiers and £540 for Britains American Civil War soldiers set 149. But by far the best of the section was seen with £150 for a single unboxed Britains figure, a rare 1920s Felix the cat, and £180 for a small group of weather-beaten and empty Britains boxes; proving the old adage of “One mans trash is another man’s treasure”.

The diecast vehicles section broken down as ever into miscellaneous, Matchbox, Corgi and Dinky sold without hitch and a 98% success rate. Multiple handfuls of playworn cars made in between £100 – 150 and the best two single vehicle prices came with £100 for a rare but unboxed Dinky 22e farm tractor in yellow/blue and red, and £250 (£100 over top estimate) for a boxed Dinky 514 Guy Weetabix Van.

Unlike the previous two years the 00 & N gauge model train section was colossal with 240 lots, a healthy dollop of high quality Heljan loco’s and an incredible 98.4% selling rate. The highest price of the N gauge was seen with £230 for a collection of Dapol & Trix diesel models, and the highest of the 00 with £380 for four Bachmann coaches. But the best of the section in my mind came with £190 for a single boxed Hornby Dublo 4654 Rail Cleaning Wagon and £500 (ten times the mid-estimate) for a Hornby-Dublo pre-war wood and glass display case; the crown jewel to anyone’s collection.

The sale rounded off nicely with the O gauge and large-scale model section, the buyers in the room had patiently waited 7 and a half hours for its arrival and showed keenness as if we were still at lot 1. The best price amongst the O gauge trains came with lot 869 a Scratch built Ivat Atlantic in L.N.E.R. locomotive together with an Exley 3rd L.N.E.R. Brake that reached its £200 estimate. The best of the large-scale stationary steam engines was lot 918 a hot air engine that gained £240 and lot 916 a good quality Stewart beam engine that reached well above estimate to £380. But the best price of the section was gained with the sale of a 3 ½” gauge 2-6-2 Bantom Cock locomotive that reached £950 with a late phone bidder.

All in all, the sale was a great success, the bottom estimate of the sale had been £55,000, but we ended the day at the top end of aspiration and a hammer total of £75,000. This is the only sale in our calendar that regularly gets called a “fair” by the clients who come great distances to join us. This name has always amused me slightly, but on reflection it is the sale that most reflects that title.  It is a sale filled with great fun and clients passionate about their subject, and I personally cannot wait until the “Toy Fair” comes to us again. We are already collecting items for our October Sale, so do not hesitate to get in touch for a free pre-sale valuation.