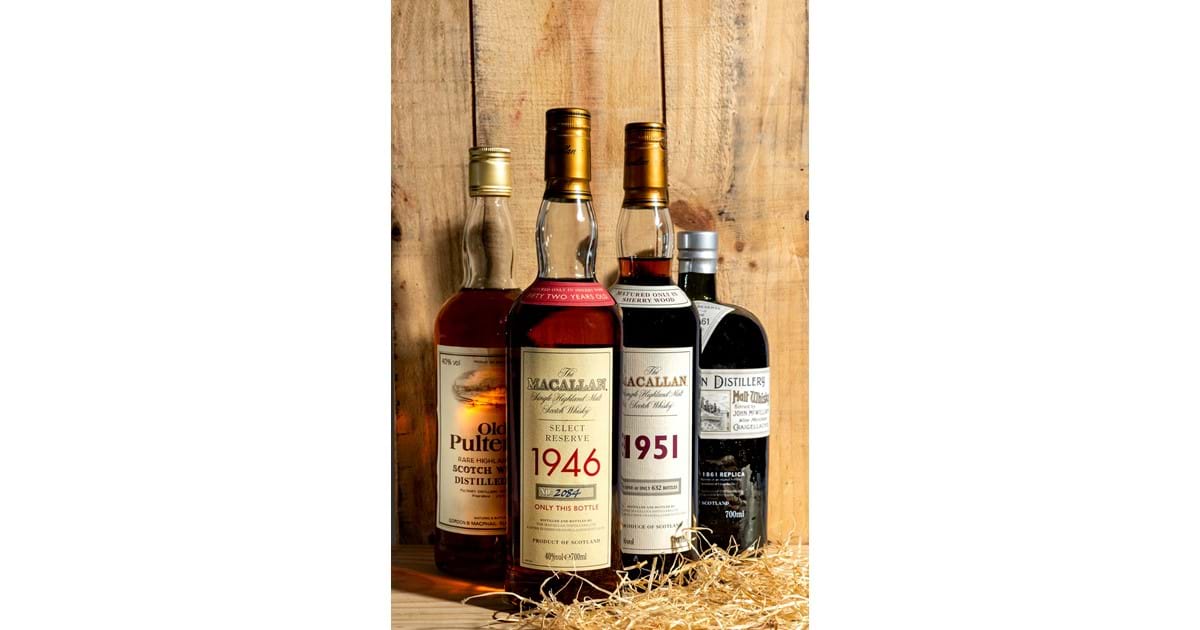 As an auctioneer it is probably bad form to have a favourite sale, it feels a bit like naming a favourite child, but I have to admit our once yearly Wine, Whisky, & Port Sale pips the others in terms of excitement. The sale itself always comes with a party atmosphere and is the gateway to our Christmas Fine Sale and the end of the calendar year.

We started our November 20th sale with the miscellaneous spirits section, filled with the mixed box lots and specialist liqueurs. This section is often dominated with brandy and cognac as the more sought after lots, with this year being no exception seeing a bottle of 1884 Bisquit Dubouche & Co. Grand Fine Champagne Cognac doubling the bottom estimate to reach £1,250 and an 1800 vintage bottle Grande Champagne Cognac by Sazerac de Forge & Fils reach five and a half times the expected bottom estimate at £3,300. Another lot worth mentioning is a vintage bottle of Green Chartreuse, which in great condition rumbled past the top estimate to reach £380, over £100 more than an almost identical lot we had exactly a year earlier.

Onto the short but shrewd tobacco section we saw eleven lots of cigars which in every case sold over expectation. Throughout the section we saw strong bidding from overseas, with a high percentage of the lots going to Chinese buyers. The three highlights of the section came from an opened and incomplete box of 17 Romeo y Julieta No.2 d luxe cigars which reached £360, an unopened box of 25 Club Coronas Cigars which rocketed up to £500 and an opened box of 37 La Flor de Morales Eduardos cigars which after gaining plenty of presale attention managed an amazing £680.

As the sale name suggests, “wine” makes up the vast majority of the lots, the first of the wine sections coming in the form of the ever popular Champagne and Sparkling wine section. The best two prices from the selection came with a late entry 1971 Moet et Chandon which snuck past the upper estimate to make £260 and a 1969 vintage Taittinger which eventually found its hammer total at £480.

Within the French Bordeaux we saw the best price in the section from a case of twelve bottles of Cos D'Estournel which made £1,150, but the most exciting prices came from the individual bottles and some very familiar names. A 1975 vintage Chateau D’Yquem peaked the white Bordeaux at £300, we had a 1960 Lafite Rothschild make £360, two separate lots of 1993 and 1986 vintage Chateau Mouton Rothschild which made £300 and £500 respectively. But heading the single lot prices of the Bordeaux we had £800 each for two consecutive lots of 1982 vintage Grand vin de Chateau Latour.

Of the Burgundy and Rhone we saw a similar story to the Bordeaux, with two stand out lots of grouped wine and some fabulous singular bottles. The best two prices for the section came with £1,550 for six bottles Paul Jaboulet Aine Hermitage with vintages ranging from 1971 to 1998, and £800 from three bottles of 2009 vintage Chambolle-Musigny. But the best single bottles came with £500 for a bottle of 2008 Chevalier-Montrachet and £640 for a 2000 vintage bottle Clos de la Roche; two and half times its bottom estimate.

But the true highlights of the whisky section and the sale came from lots 255 and 256, first a bottle of 52 year old Macallan Select reserve from 1946 which sold for £9,500, which was followed by a single malt Macallan distilled in December 1951 which sold for a fantastic £13,600. The latter was bought by a whisky fanatic floating his way across the isle of Islay whilst completing his phone bid.

The sale ended as a resounding success, with a tremendous 96% sold rate across the 601 lots and gaining a sale total of £123,000 - not only well above the predicted lower estimate for the sale, but also around double a typical yearly Wine Sale result. I am already looking forward to next year's sale and will be avidly taking in lots from now until November 26th 2022.