Leafing through our autumn sale 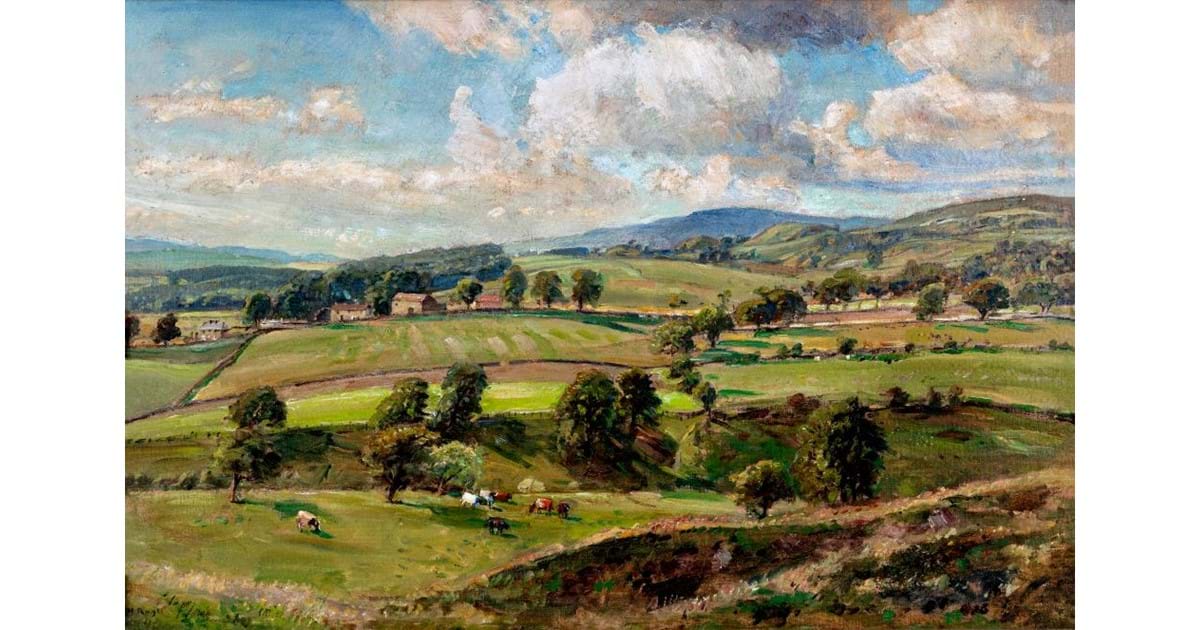 As autumn leaves started to fall around West Yorkshire, Hartleys Auction house was drenched in the last of the summer sun on our September 8th Fine Sale.  Spirits were high with a large 882 lot offering, Gerard Coughlan and Charles Hartley running the rostrum, a room full of buyers and the two video fed international internet systems ready for action.

Starting with the ceramics section we saw typical interest in the Chinese porcelain with £800 for lot 1, a teapot and cover beautifully decorated with script to the body and lid of the piece. This was shortly followed by lot 13 with two Meissen owls brought into the saleroom within an assortment of “bric-a-brac”, that doubled its bottom estimate to reach £3,600; ironic as this box-full came after the owner had asked for an email valuation in which a group of Copenhagen owls showed promise. Another good price was seen from a 1930s Royal Albert tea and coffee service in “Greenwood Tree” pattern, which pushed beyond expectations to make £1,450.

The days before the sale the silver and gold coin section had made me pause for thought. During Covid bullion prices had soared with dissolution in business investment and banks rife. So, with high streets now open and the world around us seeming almost normal, the bullion price began to creep down.  Would this leave estimates found wanting and reserves unmet?  Thank goodness not, with 94% of items within the section finding a new home and prices well within estimate – after all the true value of these goods is not merely the bullion weight, but it does help! Within the silver we saw five four figure results including £2,100 and £2,400 for consecutive lots 106 and 107, both silver table services fitted within oak canteens. Followed by £1,150 for a 22ct gold Churchill medallion and £1,550 for an Elizabeth II Dunkirk 80th anniversary gold £5 proof coin.

We started the jewellery section with a larger than normal offering of watches, seeing everything from the classical pocket examples, to big names such and Rolex and even rare contemporary offerings from the venerable Danish silversmith Georg Jensen.  We saw £1,350 and £1,450 from 18ct gold Victorian chronograph pocket watches, £1,200 for a Baume & Mercier wristwatch sporting a diamond set bezel, £1,000 for an 18k gold ladies Longines watch and £2,700 for an 18k gold Vacheron Constantin gentleman’s watch. B ut the peak of the section came with no surprises for a lady’s 18ct gold and diamond Rolex Oyster Perpetual Datejust Superlative Chronometer, which marched past its lower estimate to sell at £5,200.

The bulk of the jewellery section sold stronger than usual with a healthy volume of high-quality single owner collections, and the six highest prices coming from two of these private estates.  This saw £1,300 for an interesting diamond eternity ring set untypically with marquise stones, £1,450 for a vibrant emerald and diamond cluster, £1,550 for a stylish deco five stone emerald and diamond ring and £2,900 from a deep blue three stone sapphire and diamond ring. The two highest prices from the section came from a large and unique diamond cluster which reached £3,600 and a more classical 2.5ct diamond solitaire which went over estimate at £3,700.

Of the 80 lots within the militaria & field sports section only three did not find new homes, and although this was not the highest priced section of the sale, it arguably carried some of the more thought-provoking lots.  £600 was gained for a good condition SA dagger brought back from WWII by one of our serving soldiers, £1,650 was reached a stunning Victor Kullberg marine chronometer formerly of HMS Niger, and £750 was made for a pair of ivory gripped pocket pistols which could soon become illegal to sell if the current ivory bill has its way. Then just to prove that provenance is everything, a very standard officer’s sword (typically valued at £120 – 200) made £850 due to an inscription linking it to Lieutenant Colonel Riky who led the 48th Regiment at Sevastopol, this was then followed by two medal lots which due to the named inscription flew past the expected results with £1,600 for a damaged 1842 China Medal and £5,200 for a two-part family group of first and second world war medals.

Our once yearly books and antiquarian maps section carried a 92% sold rate, with notable results found with £700 for a vellum document bearing Elizabeth I’s seal, £700 for the millennium compiling of the Domesday book and £2,000 for 12 books including Dante Alighieri - La Divina Commedia of 1599. The best price from the section however came from A Picture of Petersburgh published by Edward Orme in 1815, which hit mid estimate at £4,000.

Onto the picture section we had a wider range than usual of art from the truly traditional, right through to the cutting-edge contemporary. From this smorgasbord of offerings we saw notable results with a £1,000 for a pair of picturesque Dutch waterway scenes by William Domersen, £1,150 for Billy Childish’s thought provoking "Trust Your Dissatisfaction" placard sporting his hangman’s noose logo, £1,600 for David Jagger’s print “Lady With a Tennis Racket” which was published in Good Housekeeping July 1928, and £1,750 for a delicate watercolour of ducks by Laura Knight. But the best two prices from the section came from local names, with £2,100 for a classic river view from William Mellor and £3,400 for "Wharfedale, View from Beamsley" from our own Herbert Royle.

Within the works of art section we found some of the most interestingly fun lots from the auction, with a rare novelty French liqueur cabinet modelled as a sedan chair (unlike any we have seen before) reaching £1,100, a bound collection of stunning Indian mica paintings which made £1,400, and an antique violin school of Vuillaume with Dodd bows which made £5,000. Though perhaps the biggest talking point of the section and maybe the largest mark up on original value other than the stamps, was seen with a very ordinary looking white hygiene coat from the Unigate Dairy White Factory which was originally worn by Princess Diana on her visit there in 1987. With very little comparison out there on the market, our lower estimate was left in the dust with a result of £2,000.

It was then time for our clocks section which was well populated with quality, seeing £900 for a sweet bee decorated Jaeger-Lecoultre timepiece, £1,150 for a 19th century French mantle clock surmounted by a high quality allegorical female figure, £1,250 for a very honest David Collier longcase, £2,500 for a brilliant carved oak cricket clock and finally £4,600 for a good quality longcase clock by Andrew Dickie of Edinburgh.

Finally we moved onto the furniture, where although those representing the antique trade on the television keep suggesting that “brown furniture” is on the up again, we saw quite the opposite with a section showing trends of our time and all prices of note coming from those items made within the 20th century. With a Lizard man dining table and four chairs making £1,200, a set of 6 Robert Thompson chairs making £2,720 and two rare Robert Thompson monks chairs making £3,000 and £3,200. We saw other successes with a pair of rare Gordon Russell arts & crafts steamer chairs making almost four times their bottom estimate at £1,450 and a stunning chinoiserie ten-piece bedroom suite which made over 3 times the bottom estimate at £3,600.

The sale was a great success, surpassing the accumulative lower estimate comfortably to make just shy of £250,000 and with a selling rate of 95.7%. We now march on towards the Christmas Sale on December 1st and have already begun avidly collecting lots for the sale.