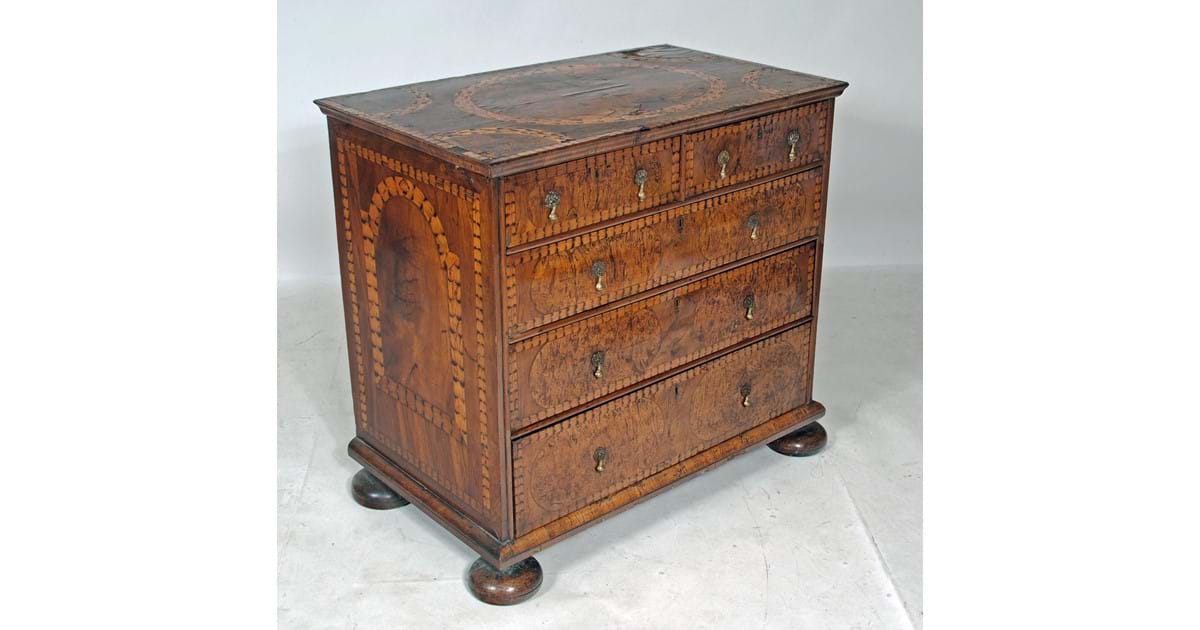 Possibly one of the smallest quarterly fine sales in recent years at 572 lots nevertheless produced a most creditable £230,000 at Hartleys in Ilkley on June 17th.  The two main headlines to report are first that “desirable” and “furniture” are words that can genuinely be used in the same sentence, and secondly works by Harrogate painter Brian Shields (or “Braaq”) are still holding their price.

The buy-in rate was only 18% giving a good indication of demand and an analysis of the bidding showed that while commission bids, telephone lines and internet bidding were all very much in evidence, sometimes aggressively, purchases made by buyers in the room still accounted for 50% of the total sold lots.

The furniture sections were very much underpinned by an excellent deceased estate from West Lancashire, and of eighteen four figure prices in this area, ten were from this consignment.

Amongst the main furniture the best price in the sale outside the pictures went to a walnut maple and marquetry inlaid chest of around 1700 which found £5,800.  More William and Mary included a walnut cabinet and stand raised on spiral twist supports, selling at £1600, while a laburnum oyster veneered and floral marquetry wall mirror, lacking its cresting, was still battled up to a four times top estimate £3600.  An early Georgian walnut cabinet on chest found £2000 and a similar aged walnut bureau £1000.

In huge contrast were a group of lots at the start of the section reflecting 20th century design.  An Ernest Race 1950’s three piece lounge suite reached £1850, a pair of Charles and Ray Eames swivel chairs and stool together found £2,800, and an unnamed Danish teak framed sofa reached £1500.  More predictably, two matching oak chests of drawers by Robert “Mouseman” Thompson sold for £1900 and £1950.

The painting section produced seven of the ten top prices in the sale, and five paintings by Brian Shields together boosted the sale total by £50,000.  At the top was a busy seaside scene, entitled “Hey Mister look what your donkey’s done to me best boots”, selling for £17,000, next was an urban snow scene at dusk, selling for £10,000.  Then £9000 was paid for a small Yorkshire Cricket Scene, £8000 for an urban canal side scene, and finally £6000 for the smallest, a beach scene with figures and boats.

Another popular Yorkshire painter is Peter Brook and his rural snow scene “Passing a Bronte Farm” sold enthusiastically at £3800.  This price was also paid for a traditional pair of Highland Scenes with dogs and ponies by Robert Cleminson.  Ilkley artist Herbert Royle’s oil study “Harvest Time from my Studio, Nesfield” reached £3000, while a minor triumph was Stuart Walton’s oil “St Mark’s, Woodhouse, Leeds” selling at £1100.

A buyer in the ceramics section was obliged to pay generously to secure a 25” Cantonese vase and cover from a deceased estate as he already owned one half of the pair.  They had been together a generation ago, but as everything was going to charity, the rescue cost him £1000.  A Galle cameo vase 8 ½” high decorated with bog plants reached £4000.

Two outstanding items in the antique silver were a Queen Anne Britannia Standard sugar castor c.1706 of 21ozs which found £1400 and a pair of George II baluster candlesticks, 1741, of 29 ¾ozs selling for £1800.

Watches included a gentleman’s steel Rolex Perpetual GMT Master II rising to £2500, and a lady’s 18ct white gold Beaume and Mercier watch with diamonds set around the bezel which found £1500.  This was also the price of a cool Art Deco style aquamarine and diamond cocktail ring.

Amongst the works of art, a handsome silvered bronze figure of a Borsoi dog 31 ½” long by Joseph Korschgen comfortably exceeded estimate at £1750 and a pair of 20th century bronzed metal figures of Diana and the Apollo Belvedere on granite plinths 19” high went more than five times top estimate selling for £1300.

Finally, this time of year is always celebrated with a section comprising garden and architectural items.  The most expensive of these was a 35” high set of four Victorian cast iron campana urns which sold for £2400.  The most unusual was a carved and stained pine pulpit made in 1882 for the German church in Great Horton, Bradford, which was heavily financed by the Delius family.  This item sold to the trade for £450.