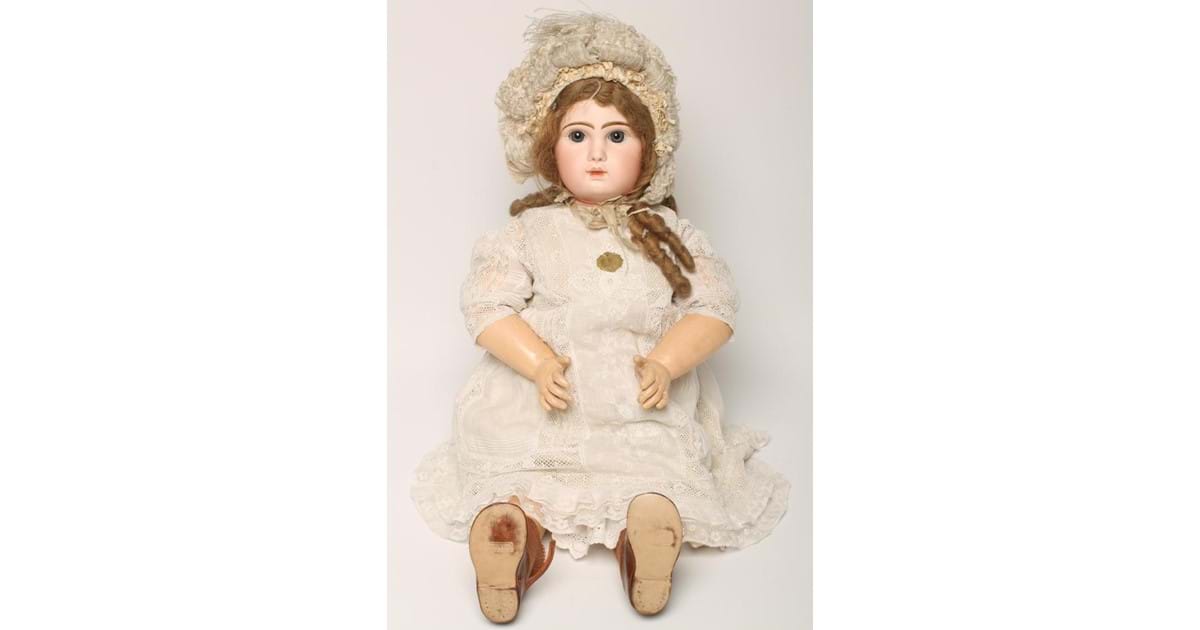 Hartleys’ twice annual Toys and Collectors Sale in Ilkley on Saturday 22nd turned into an auction of two distinct parts.

Dolls unlike six months ago produced a very muted result with a larger than normal buy-in rate.  Thereafter the day slid up several gears to produce some very satisfactory prices.

There were doll sales to report however, with £850 being the price for both a Simon and Halbig 36” bisque head doll, and also a French 33” bisque head doll.  The best teddy bear to sell was a rare pre-war 15” Merrythought bear selling for £640.

The miscellaneous section which followed produced much of the surprises within the rest of the sale.  The best price by some distance was paid for a collection of three board games printed on linen, each folded into its own sleeve with an explanatory booklet.  All were produced by Wallis between 1811 and 1824, and their completeness and relatively good condition considering their age confounded the modest pre-sale estimate of £180-£220 to produce £6000.

From the same owner’s collection were “Lanes Telescopic View of the Great Exhibition 1851”, another Victorian item in its sleeve but opening out telescopically, which found £560, and a similarly aged box viewer with Views of Paris and various other items, selling for £800.

An Austin J40 pedal car, the sort that “rich boys” had in the 1950s, covered in rust but generally complete found £1550, and, the strangest item in the sale, a “wacky” television set made by Paul Badham for I.T.V. in the 1990’s and sprouting strange animalistic legs and speakers £460.

Several rocking horses were on offer, the best being a late 19th century example on large bow rockers with a full restoration necessary which found £2600 in spite of being too late for the catalogue.  Another much later horse in carved pine, which had been “loved” somewhat by the owner’s dog, rose to £1100.

A large collection of small Eagle plastic boat kits, boxed and ready to assemble, 711 in all and divided into six lots, produced a battle between a buyer in the room and another on the internet and a total for the owner of £5,420 (or £7.60 per model).

The remainder of the sale in various categories totalling 260 lots was summarily put to bed with only eleven lots left unsold.  The best autograph lot was a photograph signed by Laurel and Hardy with a letter also signed by them which together sold for £500, and a relatively small diecast vehicles section included a boxed Britains 172F Fordson Super Major tractor together with a Britains Farm Roller and a Spot-On Ford Zodiac selling together for £380.

The end of the sale comprised model railways of various scales, most of it being OO gauge comprising 90 lots.  The items were mostly grouped into composite lots, and for instance featured three OO gauge Bachmann and Hornby train sets at £300 together, and a Marklin gauge One clockwork 4-6-0 locomotive and tender L.N.W.R. “Experiment”, selling for £380.

The last lot in the sale was a grown-up railways item, an enamelled tin station totem sign, the sort which always attracts good prices.  This one was for Stoke station on the Stour Valley Railway, Suffolk until it was closed by Dr Beeching.  It was recovered (with permission) by the local vicar’s son who was the sale owner.  A small station meant no more than four signs were likely to exist, the colour was a rare dark blue and condition was reasonable, all of which produced a final price on the telephone of £1750.