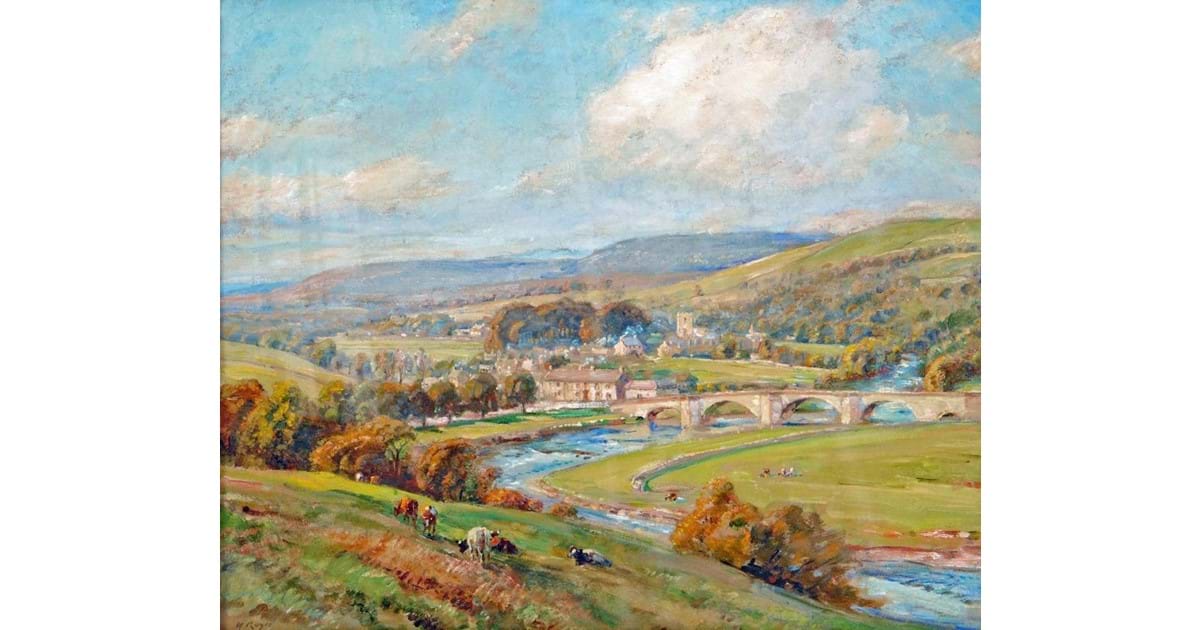 Hartleys June 19th summer fine sale in Ilkley produced a useful total of nearly £310,000 with the two areas of greatest interest to the auctioneers being the picture section and their first experience of live internet bidding.

The dominant factor within the pictures was once again the works of Brian Shields (or Braaq), seven examples of which were on offer.  Coming from a number of different owners across the country, all sold comfortably above top estimate, the best price of £16,000 being shared by two examples “Our Chippie” a well populated street scene, and a larger frozen lake scene.  Nearly there at £15,500 was “Ay Up You Daft Sod”, another populated skating scene.  Four of the smallest “Braaqs” sold recently, were two portraits of a little girl 6” x 5” selling for £3,400 and £3,800, a tiny winter scene 5 ½” x 7 ¾” selling at £2,400 and a beach scene of the same size at £4,600.

Another more traditional local painter Herbert Royle acquitted himself well with a stunning view of Burnsall selling at £8,000, and a small rather dark winter scene in Nesfield Village at £4,400.

The catalogue cover picture was “Blue Summer”, an oil beach scene with mother and child, only 11” x 13” by Walter John Bayes which went three times its upper estimate to sell at £3,600.

The phones of course were particularly active throughout this part of the sale and the auctioneer was at his most challenged as several lines were dealt with while the live internet tried to butt in with similar bids at the same time.  The selling rate fell somewhat as a result of the net bidding but hopefully not enough to unsettle the company who were good enough to turn up in person.

The annual offering of garden and architectural items featured in this sale.  Whilst several stone troughs at the bottom end failed to find buyers, the best items received the interest they deserved.  A late Victorian iron rose arch went to nearly six times its upper estimate at £3,400, and a fine 20” pair of Vincenza stone hounds reached £2,000.  A Victorian wrought iron six bar estate gate sold for £1000.

The best price in the jewellery section was £7,200 bid for an Art Deco style emerald and diamond cluster ring while a diamond line bracelet of thirty three stones totalling over seven carats seemed reasonable at £5000.  A Tiffany diamond pendant modelled as a bow with tassel terminals reached £3,100, a pair of diamond drop dress earrings £2,600, and a three stone diamond ring of 1.9cts £2,500.

The quoted silver bullion price had slipped somewhat in the couple of weeks before the sale resulting in a few frantic phone calls to owners before the sale.  This mainly threatened 20th century items, an example being an Aspreys twelve setting table service of 213ozs which sold below estimate at £2,500.  A four piece tea and coffee service with its tray, totalling 128ozs managed a within estimate price of £2,600.  Similarly a George III wirework sugar basket, dated 1768 reached £1,000, while a Russian cloisonné enamel snuff box went to an upper estimate of £1,950.  A George III wax jack, London 1796 reached £900, and a 7” bowl of 1750 with good armorial £1,050.

Within the ceramics most interest was reserved for a Clarice Cliff eight piece tete a tete in “Summerhouse” pattern which sold for £2,200, while a Royal Doulton “Red Haired Clown” jug reached £1,500. A Goldscheider earthenware bust of a Nubian female 22” high reached £1,500, a pair of Royal Worcester plates painted by R. Sebright £1100 and a Moorcroft 16 ½” pomegranate pottery vase £1,000.

The fine arts section held its own surprises, the one which did the best being a large Chinese carved ivory tusk on stand.  In the face of phone lines from China and net bidding from doubtless the same area, it fell at £7,000 to a Harrogate trade buyer.  Another surprise was a somewhat dilapidated Goyard cabin trunk which sailed away at £3,200.  A 20” bronze figure “The Sluggard” by Frederick Leighton, with somewhat indifferent surface, reached £2,400, a marble bust of a shy girl on a well worked pedestal by Pietro Bazzanti £1,500, and an English pewter Arts and Crafts biscuit barrel, designer Archibald Knox, £1,100.

Clocks and furniture continue to be difficult and confusing although an excellent longcase clock by Rollison of Halton landed on target at £2,500 as did an imposing disc playing Symphonium on separate disc cabinet, selling at £5,800.

Such is the confusion within furniture sales, that the best price here went to a 20th century item, a mahogany dining suite comprising extending table 10ft 6in long and ten chairs which sold for £3,200, over twice its bottom estimate.