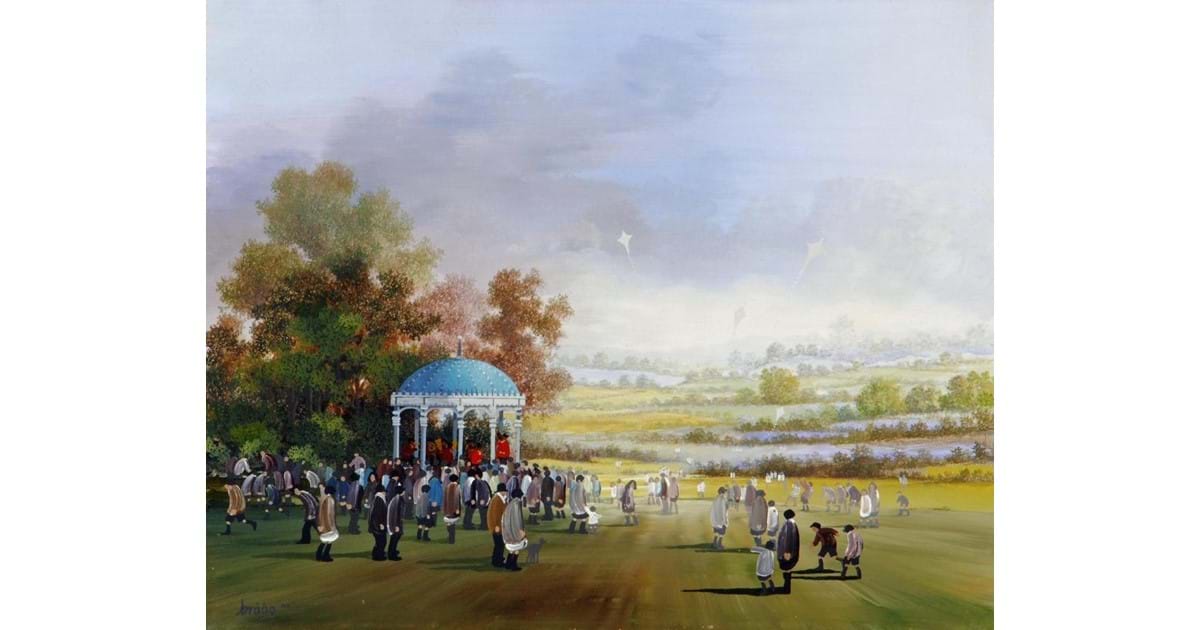 The Autumn sale of Hartleys at Ilkley on September 10th produced a varied cross section of results across the different commodities which were represented on the day.  The 813 lots on offer produced a buy-in rate of 23 ½ % across the board which disguised some very different results as the day progressed.

The sale fielded two specialist sections, books and maps in the morning, and weapons, militaria and sporting items in the afternoon.  This morning special section which comprised 131 lots produced a buy-in rate of only 7.6% including an eclectic mix of items on offer.

Dominant amongst the section was a most interesting private collection from the late J.A. Harrison, an antiquarian book dealer and a specialist in the esoteric and juvenilia.  Included in this area comprising 58 lots were “A Visit to the Regent Iron and Brass Foundry 1824” sold for £900, “Moral and Instructive Tales for the Improvement of Young Ladies” c.1800-1850 £750, and “Picturesque Round Game of the Geography of the World” by Francis Renyard £2,800.

Also included in this section was a fascinating “Souvenir From Egypt”, a collection of large format photographs compiled by Albert Mallord on military duty and including his campaign medals during his service in Egypt and the Punjab in the 1890s.  This composite collection sold for £540.

The final part of the section devoted to old maps was dominated by two particularly collectable items, John Blaeu’s “British Isles” which found £2,200 and John Speed’s “New and Accurat Map of the World”, engraved in 1651 which sold for £3,700.

The militaria and sporting collection of 140 lots produced a buy-in rate of only 6%, with a large number of lots selling well above estimate.  This was perhaps due to the caution of Charles Hartley, the youngest member of the team with his first major offering in his own specialist area.

Some particularly satisfying results were a rare .38 bore self cocking percussion revolver c.1851 selling for £1,300, a French Curassier Heavy Cavalry sword dated 1815 £800, a 19th century flintlock police pistol £750, a Beaumont-Adams type percussion revolver £950, and a Scottish Dirk for the 42nd Royal Highland Regiment of Fort Black Watch (19thC) also selling at £950.  An Officer’s 16 bore flintlock fusil by Samuel Galton reached £1,550, and a particularly curious French Apache-type pinfire knuckle duster and dagger pistol c.1870 £1,650.  Star of the show however was a superb collection of items so marketable these days because of collective provenance, comprising the archive of Flight Lieutenant Matthew Holliday D.F.C.  He was a flight engineer in Bomber Command in the 1940’s who completed fifty two combat missions and on offer were not only his medals but also much of his equipment, photographs, log books and other ephemera, and even his father’s WWI medals.  The collection together sold for £3,200.

The main parts of the sale fielded all the usual commodities including ceramics and glass to start the day.  The best lot in this area was a collection of five late 19th century Meissen monkey band figures which sold for £1,250.  The glass included a sealed wine bottle, dated 1773, of mallet form which found £620.

Amongst the watches and jewellery were a Gents Rolex Oyster Perpetual Datejust wristwatch which sold for £2,200, a solitaire diamond ring of 2.13cts in total £4,500, and another simpler solitaire, of lesser quality colour found £2,200.

In the afternoon, a somewhat patchy picture section produced variable results.  A limited edition lithograph by L.S. Lowry “Seaside Promenade” sold well at £1,750, while another beach scene, this time an original pencil drawing by Lowry, and a much less interesting subject only reached £3000.

A typical oil genre scene of two children by Edwin Thomas Roberts (1840-1917) rose to £1,800, and an interesting oil on board “Thatched Cottage” by Kershaw Schofield sold for £950.

The three most outstanding items in the works of art and textile section were a WMF Art Nouveau claret jug, in need of some repair, but still perhaps one of the most stylish items on the day which sold for £660, an adzed oak plaque by Robert “Mouseman” Thompson depicting an owl on a branch £700, and an Isfahan design wool carpet which more than trebled its upper estimate selling for £1,300.

Furniture is no longer the easy ride that finished every sale and in this instance the buy-in rate was 26 ½ %.  Nevertheless there were items well worth recording as they found their buyers.  Within the clocks were the best price in the sale, a superb champleve enamel and ormolu garniture stamped Samuel Marti which went ten times its upper estimate at £12,500, and from the same owner, a champleve enamel and ormolu mantel clock selling at £3,500.

A small section of garden items, not usually offered at this time of year included a striking Victorian sandstone heraldic beast finial 69” high christened “Scoobidoo” by the portering staff which deserved its final price of £1,150.

The last lot of the sale would sixty years ago have risked the bonfire held after every sale at Victoria Hall for any items left unsold.  It comprised a matched set of six Yorkshire yew wood Windsor chairs with high hoop backs which together sold for £1,200.