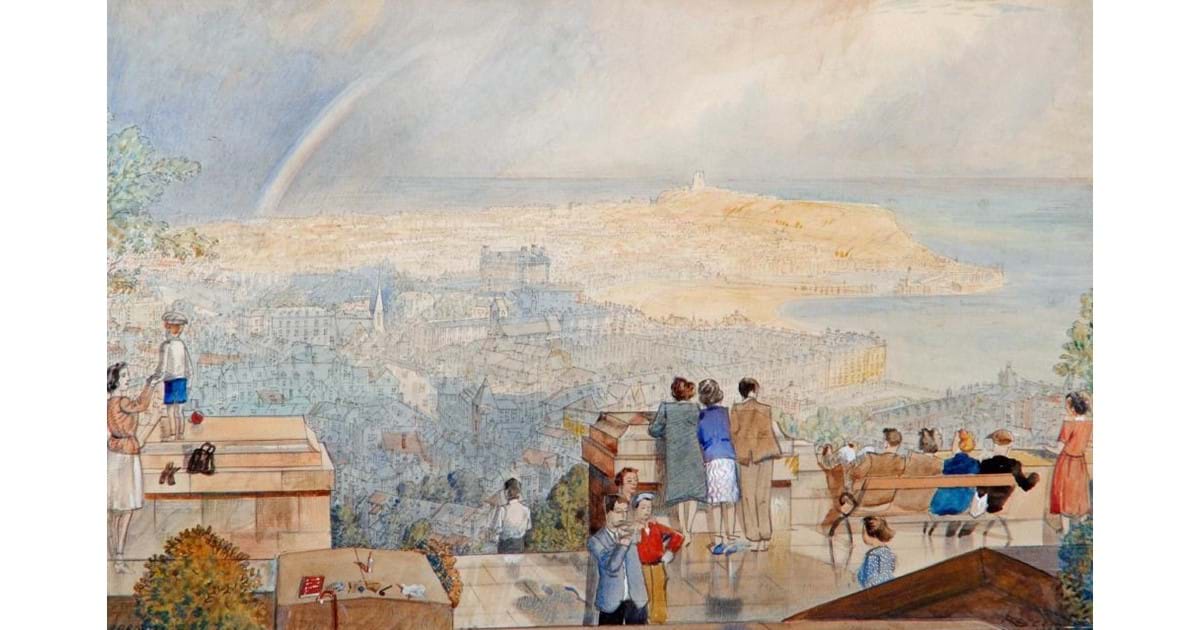 The Winter Fine Sale held by Hartleys in Ilkley, West Yorkshire on December 3rd provided an interesting event with a wide selection of items on offer.  As is usual these days, some areas were more readily received than others, but the general message seemed to be that decorative items such as ceramics, bijouterie, works of art and pictures were in good demand, high priced jewellery was harder to get away, and furniture and clocks provided a more than reasonable disposal rate.

The sale started with ceramics and glass, and one area which stood out in this commodity was a run of 19th century Cantonese porcelain items of various sizes and shapes which were entered from an estate in Lancashire.  It seems that the owner had experienced an extended stay in Changi Jail, Singapore in the 1940s as a guest of the Japanese Government, and somehow as a result developed a liking for this particular type of Oriental porcelain.  The stars of his collection were a pair of 24” vases with shi-shi handles and typical decoration which sold for £2000, and another similar single vase, 35 ½” high selling at £1,850.

In the same area, a Moorcroft tobacco jar with poppy pattern and Tudric pewter lid and base exceeded its top estimate at £600.  Amongst the glass, an 8” Daum cameo vase enamelled with pine needles and pine cones sold well at £3000, while a Galle cameo lamp base with matched Galle shade, 14 ½” high overall reached £800.

The silver section was divided up into antique, modern and bijouterie, to celebrate the festive season.  The very first lot was actually 9ct gold, and was a handsome and decorative trophy cup inscribed “International Horse Show Olympia 1928, won by Thomas Glencross”, “Tommy” Glencross, the owner’s grandfather, won the High Jump at the first show in 1907 and the cup which weighed in at 744gm sold for £6000.

Other notable items were a set of six Liberty & Co enamelled teaspoons designed by Archibald Knox which sold at a mid estimate £650, a four piece tea and coffee service of 59 ½ ozs dated 1937 reached £600, a George III teapot and stand dated 1788 found £800, and an item which might have clocked in at scrap value was a silver processional cross, rather the worse for wear and bearing a label “Damaged London Blitz 1941”.  However this excellent tale did not hold water as the hallmark showed 1965, but nevertheless it found £340 or £13.5 per ounce, 60% higher than scrap.

The jewellery section was avidly viewed and attended, but in the end, many of the higher priced items remained unsold.  The best item sold was a most attractive diamond ring with emerald cut stone flanked by four graduated baguettes which sold locally at £3,600 and is hopefully to be installed on a young lady’s hand in the relatively near future.  Other jewellery prices included a pair of sapphire and diamond cufflinks £2,300, a pair of diamond stud earrings totalling 1.49cts £2,400, a diamond bracelet with shaped links £2000, and a more standard diamond “tennis” bracelet £1,600.

The afternoon session started with prints and paintings, and apart from a collection of miniatures and silhouettes where very few items sold, interest and bidding held up very well.  The first lot, a set of six eye-catching lithographs “Car Racing” by Montaut, dated 1913/14, sold to a motor enthusiast in the room at £750.

Amongst the watercolours an unusual self portrait drawing by Sir Frank Brangwyn, standing out as a rarity amongst all his architectural inspired works, sold well above estimate at £750.  The same price was paid for a sentimental work “The New Brood” by Gaetane Capone, depicting a young girl feeding her young hens, an oil by Belgian Alexis de Leeuw “Bringing the Horses to Water” reached £900, and a portrait of a bulldog indistinctly signed found £850.

The Yorkshire selection fielded one or two unfamiliar names which showed promise.  A pastel by Ken Jackson “Entering the Paddock, Ripon Races” doubled its upper estimate at £1,150, and a watercolour by Fred Jones “Scarborough from Oliver’s Mount” went to £800.  Finally, the single oil from Brian Shields “Braaq” entitled “I’ll think I’ll try for a Goldfish”, and depicting a busy fairground in an industrial landscape sold for a mid estimate £10,500, the day’s best price.

The works of art section included a wide variety of items, some more useful rather than ornamental but all with some element of decoration.  For instance the Edison “Home” phonograph, a working model with horn and selection of wax cylinders and all its manufacturers transfers on the case reached £520.  Strictly decorative, an Art Deco bronze figure of a flapper on onyx base by J.M. Michel sold for £1000, while a pair of bronze wool weights cast in relief with the Royal Coat of Arms went to £800.

The clock section was of reasonable size and produced an 80% selling rate including several good prices.  A Georgian brass cased lantern clock by James Marwick Jnr, London, exceeded double its upper estimate at £1,400, while a series of bracket clocks included one by Barraud, London, with repeater movement, sold for £2,500, and another by Robert Sly, Westminster reached £4,400.

A selection of longcases included an eight day by Joseph Roberts, Leeds, and an eight day chinoiserie cased example both finding £900, and another by George Thatcher, Cransbrook selling at £950.  The final lot in this section was not a clock but a large Swiss interchangeable musical box, possibly by Paillard of Geneva, playing twenty four airs on six 11” cylinders, standing on an associated similar stand, and this sold at an upper estimate of £2,300.

Finally, the furniture completed the sale with the usual mixture of Georgian, Victorian and 20th century items.  One of the youngest items was an adzed oak bedside cupboard by Robert “Mouseman” Thompson which sold for £1,100, while the Victorian and Edwardian era produced an inlaid serpentine display cabinet at £950, which was also the price each for an ornately carved oak Gothic style wardrobe and an 8ft wide mahogany breakfront two stage bookcase.  At £900 was a fine burr walnut and inlaid foldover card table, 38” wide.

The Georgian era produced the best furniture prices and these included a set of eight mahogany dining chairs including two carvers with shaped and carved tablet backs which sold for £900.  An oak and mahogany banded enclosed dresser with delft rack dating from around 1800 reached £1,100, and a Georgian mahogany and parcel gilt pier glass complete with scrolled crest and eagle surmount £1,350.

The best furniture price this time was paid for a solid oak credence table, described as 17th century and later with the usual canted top and boldly turned legs, and this sold for £1,500.