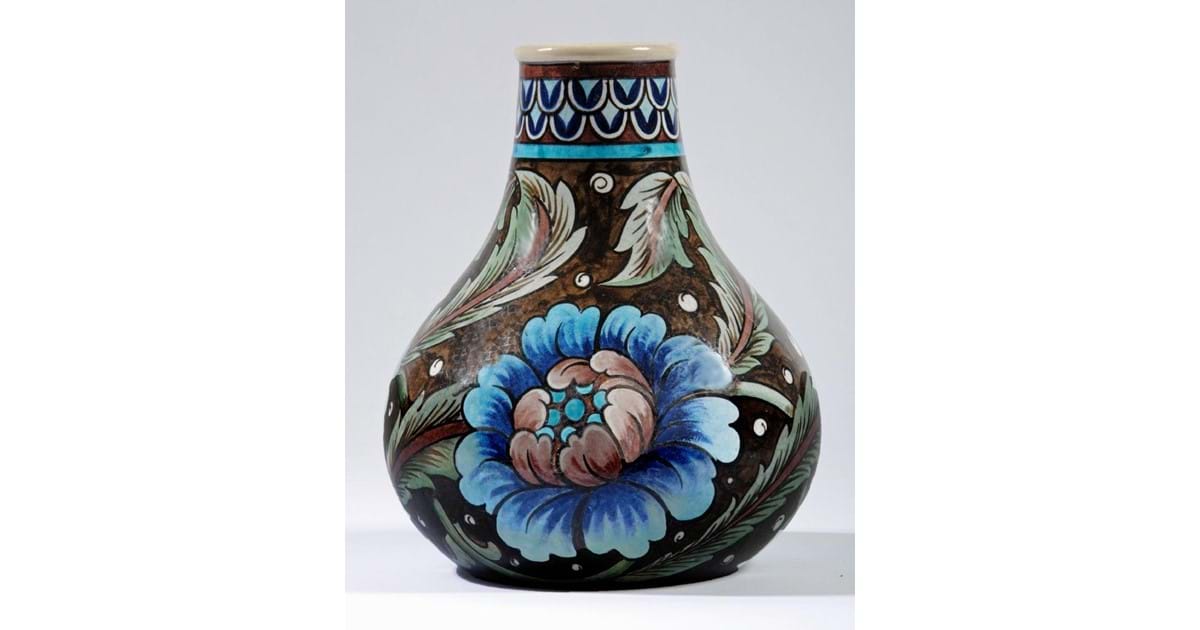 The Spring Sale of Hartleys in Ilkley on March 25th produced what is now regarded as the norm in a wide range of results.  Interest in individual items was often either intense with an unexpected price resulting, or near enough nil producing a no-sale, and all with no way of predicting which way demand would go.  On the day there were thirty six lots sold for four figure sums and 23% by lot withdrawn unsold.

The sale started with ceramics which were totally dominated by a mainly single owner offering of fifty lots of blue and white pottery.  The collection amassed in a home in North Yorkshire produced much interest and a best price of £1000 for a Quadruped Series chestnut basket, which was eight times its top estimate in spite of extensive damage and restoration.

Elsewhere in the ceramics a Burmantofts “Faience” Persian vase reached £360, a Royal Doulton Lambeth stoneware group by George Tinworth “Play Goers”, with mice watching a Punch and Judy Show £1450, and a Royal Doulton figure of St George which failed to make £250 three months ago, sold for £580.

The silver sections followed and silver in the last few weeks has upped and downed around a melt price of £9 per ounce, the metal worthily earned its keep.  A pair of parcel gilt rococo style candlesticks dated 1972 and weighing 88ozs produced £2100.  An unusual combined cigarette box and match box by Aspreys of 1919 reached £500, a William IV three piece tea service £850 (or 13.38 per ounce), an 1845 mustard with pierced decoration of over 5ozs £700, while two 9ct gold cigarette cases, one of 143gms, the other of 139gms each achieved £1100.

Watches are a commodity which reflects personal taste and availability of surplus cash even more than the main jewellery section.  A Luminor Panerae chronograph in need of some care and attention still doubled its top estimate at £1800, and a gentleman’s Rolex steel and gold Oyster Perpetual Datejust chronometer found £1750.

The jewellery section produced a lot of gaps in the selling rate totalling 59% unsold, yet still there were several good pieces and the second best price in the sale.  This was a princess cut solitaire diamond ring of 3.10 carats with baguette shoulders of .85 carats each, which found an above estimate price of £9500.  Other prices included a solitaire diamond ring of 1.7 carats £2300, a six stone diamond half hoop eternity ring also £2300, an opal and diamond set dress ring £4400, and a Victorian diamond and pearl necklace £1100.  A two stone diamond crossover ring sold after the sale at £6500.

The afternoon section commenced with pictures which were dominated by two Yorkshire painters.  Two oils by Peter Brook caught the silence and space of rural Yorkshire.  “Edge of the Wood” reached £3600 while “Drawing Outside and Suddenly the Sun Came Out” the same size, climbed to £6200.  A totally different but nevertheless modern view of the North was depicted by Brian Shields (or Braaq), with four examples, the best of which was entitled “For the Last Time Get Off” and reached £9800, the best price of the sale.  Two others sold for £8000 each, and another less quirky offering reached £3800.

Also from the North was a street scene with figures by Arthur Delaney which realised £4000, while a typical late Victorian study of a young women in fire lit interior playing a lute found £2100 and an anonymous late 17th or 18th century oval portrait of a lady rose to £1600.

The fine arts section included a collection of Art Deco pieces from a small house lower down the Wharfe valley including several figures and lamps.  The best of these was a 15” cold painted bronze figure of a dancer after Lorenzl which quadrupled its lower estimate at £2000.  A 22 ½” bronze by Raul Xavier “Young Arab Cutting Wood” reached £1150.

Spring and Autumn have become the focus for weapons and sporting items in these rooms, under the guardianship of fourth generation Charles Hartley.  September is already looking very promising, but in the meantime the most interesting items of the current outing were an East India Co Land Pattern flintlock pistol selling at £720, a Japanese Edo period Katana £500, an 1861 Snider Mark II rifle £420, a Miroku over-and-under shotgun £460, and a delightful Hardy Deluxe Smuggler Classic six piece fly rod in leather case £200.

Clocks are very much at the sharp end of the market these days, either they sell or they don’t.  The two best longcases were a walnut 30 hour by P. Avenell, Farnham selling at £850, and another by Wright, Knoll in cut down oak case which reached £1050.  Two repeater carriage clocks were both purchased by the same local collector on the telephone for £950 and £850.

The furniture section was very much a match of two halves with the traditional oak and mahogany taking its place as usual.  A property near Wakefield produced a number of imposing old oak pieces.  These included a late 17th century oak livery cupboard selling at £800, another livery cupboard of simpler lines £1000, a Georgian enclosed dresser with delft rack £900, and an impressive enclosed dresser 10’8” wide in a somewhat interesting structural state £1000.  Also in this area was a delightful small Georgian pot board dresser base just 55” long, useless for storage but great to show off in the dining room which found £1250.

The other part of this section was the newly declared “20th Century Design” made in response to the emerging interest in 1930’s and 1970’s pieces now in so many cases selling well ahead of traditional older items.

The change in emphasis was amply justified with the sale of three particular lots comprising a set of six Niels Moller cherrywood single dining chairs at £1850, an Art Deco satinwood and ebonised three piece lounge suite £1200, and a Danish rosewood dining suite possibly by Prebenskoven, which in spite of ruthless restoration, reached £1100.

The last item is also a mark of the current civilisation as we are obliged to know it.  Anything in rosewood may be the Brazilian type which has been deemed to be an endangered species, so needs a “CITES” Article 10 certificate obtained from DEFRA in Bristol to allow it to be offered for sale, and currently costing £31 (plus all the form filling).