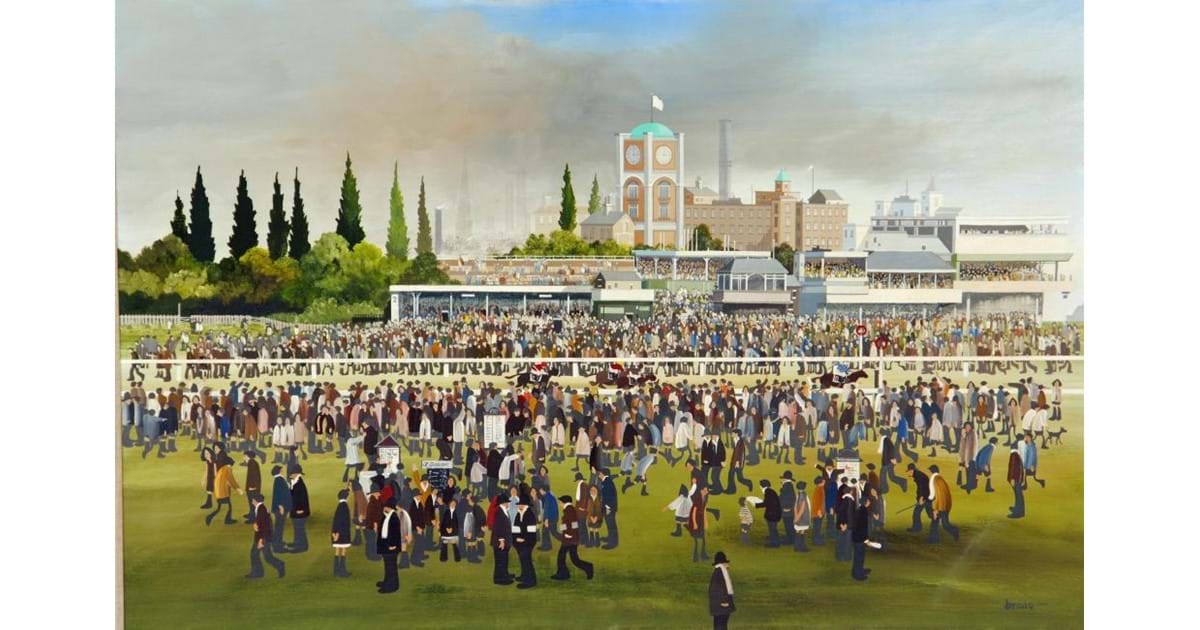 Brian Shields Braaq.  Once again the pendulum has swung in the direction of Ilkley for the World Record auction price for an oil painting by Brian Shields, or Braaq.

At Hartleys sale on March 26th, the hammer fell at £56,000 for a view of a racecourse (possibly Doncaster) entitled “Does the mean there’s no dinner now?”

Another sporting picture entered by the same owner, this time with a cricket match in progress, and called “I bloody hate cricket” went to the same buyer for £42,000.  Three other “Braaqs” all his more usual semi-industrial and townscape views achieved between £12,000 and £14,000 each.

Since the start of 2012 when these paintings have really taken off in price, Hartleys have sold a total of thirty six Braaq oils, all from throughout the United Kingdom except for one from Sweden.  The database of sellers many of whom still hold several examples and buyers who often specialise in particular subjects, is now growing into a significant marketing tool for future sales.

Amongst the other categories in this fine arts sale such as jewellery, ceramics, silver and furniture was a special section of 110 lots devoted to militaria and sporting items including a wide variety of items.  A rare 19th century Saxon heavy cavalry sword reached £1,550, a late 18th century cavalry officers sword £1350, a pair of German U-boat binoculars £700, a 19thcentury full suit of armour £950, and a Beretta shotgun £640.  The section was rounded off with a selection of taxidermy and trophies including a preserved perch in case by J. Cooper London 1873 selling for £1000, and a preserved barbel in case “caught at Harwood 1921” at £980.  It is hoped a further section of this kind will be added to a regular fine sale in the next few months.