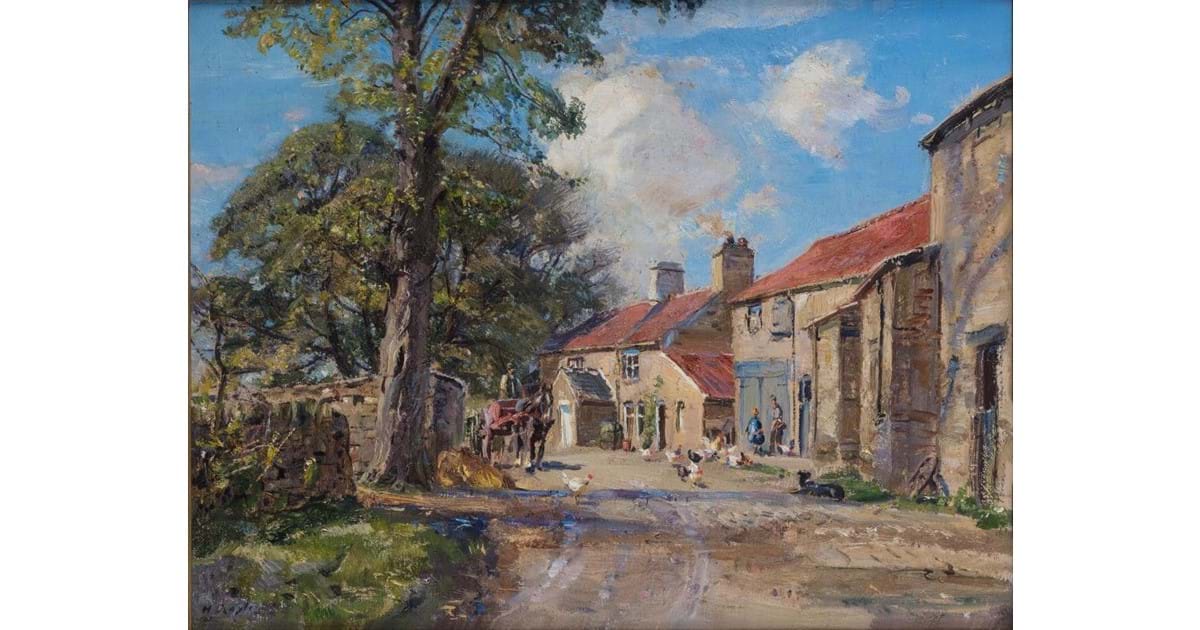 Hartleys in Ilkley held their Summer Fine Sale on June 12th, and the main news coming out of this was the success of the furniture section.  Representing 30% of the sale it produced ten of the fifteen top prices.  This particular event included the usual antique and 20th century furniture but also featured an interesting accumulation of garden and architectural items.

In this latter area, the top price was paid for a large Victorian circular sandstone urn which went nearly five times its upper estimate to reach £3800.  The following lot, a similar but smaller piece rose to £1400.  A sculptural bronzed metal birdbath surmounted by four birds on the rim by Australian artist Will Wilson found £1400 while at the other end of the spectrum a collection of around sixty five Victorian salt glazed edging tiles together with thirty five square columns with pointed finials produced a final bid of £1650.

With the 20th century furniture there was proof of how reasonable Robert Thompson ex-apprentices’ work can be, compared with the man himself.  An adzed oak refectory table and six chairs by Colin Almack, the “Beaver” man sold in two lots to total £1500.

Also from the late 20th century was a Robert Heritage for Archie Shine teak “Hamilton” dining suite with long low sideboard table and six chairs which rose to £1000.

Then on to traditional furniture, and two very typical Victorian glazed mahogany breakfront bookcases went well above estimate.  One 8ft 8ins wide found £1800 and the other 13ft 3ins wide with maker’s label shot away at £3600.

Many of these prices have been seen before but not for some time, and it indicates how the more desirable pieces will now produce the kind of competition we always used to take for granted.

Elsewhere in the sale there was more to report, the first being a rare pair of 9” Moorcroft “Claremont” pattern baluster vases which achieved a mid estimate of £4000.

Taken out of the monthly general sale offering of stamps and coins etc, were six lots of stamp albums which produced between them £2480.  The best single price was £800 for an album of Victorian postal history including a penny black.  Amongst the coins, it was obviously the gold that took the top interest.  Perversely two 1970s Krugerands sold to private buyers, the first for £1050, the second virtually identical for £1200.  In the same section, a limited edition 22ct gold Winston Churchill medallion weight 33.8gms, reached £1200 and a gold snaffle link Albert watch chain stamped 15ct £1050.

Amongst the watches, the top price went to a gents 18ct gold Girard-Perrega4ux “Vintage 1945” wristwatch with composite dial which just topped its upper estimate at £3600.  A late Victorian 18ct gold chronograph dated 1882 sold well at £1000.

The Works of Art section as usual produced an eclectic mix of items, such as a violin stamped “Thouvenel Henry” with two bows selling for £700, two 19th century Indian School albums each with twelve paintings on mica of figures and gods selling for £900, and the main favourite, an imposing bronze figure of an equestrian knight in armour by Emmanuel Fremiet which nearly doubled its top estimate at £3200.

Finally, the picture sections included a watercolour “Autumn Sunshine” by James Thomas Watts, reaching a mid estimate of £1000, and an oil of “spaniel and terriers playing” attributed to George Armfield which sold for £1050.  The best picture price however occurred in the Yorkshire section.  It was a view of Lower Dene Farm, Nesfield, near Ilkley by Herbert Royle only 14” x 18” which yet again suggested former days and prices for this artist, achieving a final price of £4000.