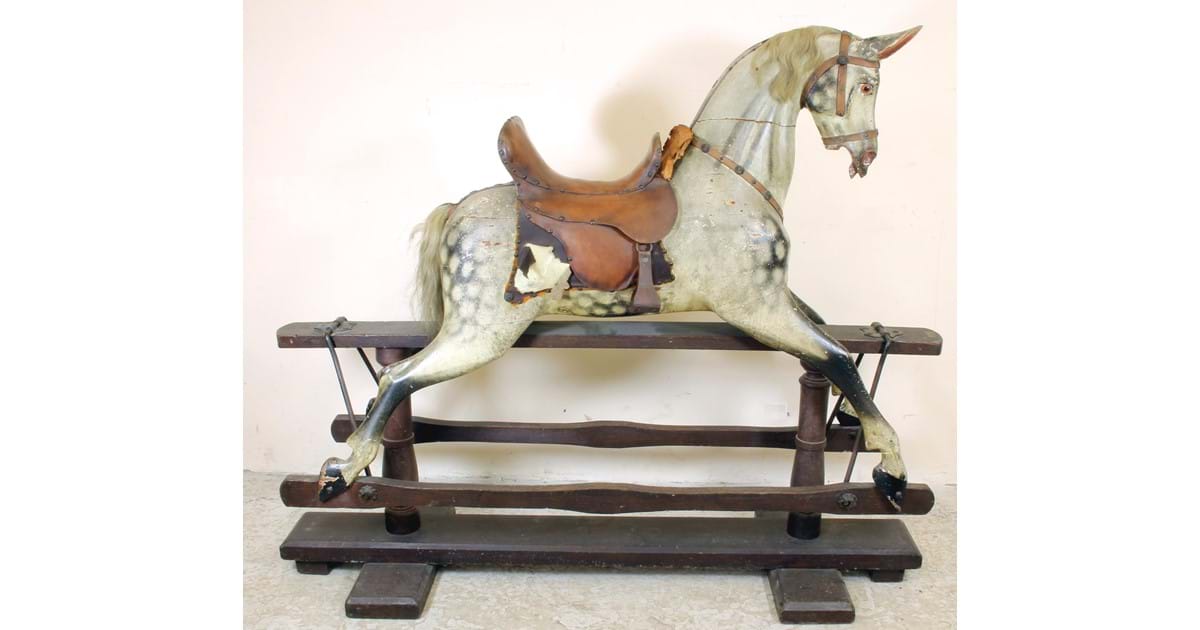 The twice yearly sale of toys and collectables held at Hartleys, Ilkley on September 24th was dominated by The Anthony Dew rocking horse collection.  The sixty lot section out of 560 lots in total produced over a quarter of the sale total with only one item unsold.

The highest price paid by a French purchaser was £4000 for an extra large F.H. Ayres horse c.1880, with safety stand and two extra seats reconstructed to match the original by Anthony Dew.  Not far behind at £3600 was a rare Ayres horse, also from the 1880s with a swivel head and this had been fully restored to its former glory, by the owner.

A large “Bronco” horse by Fawcetts of Leeds bought at Gamages in London around 1910 for 75 shillings (£3.75), and in the same family for the last 70 years, in unimproved but mainly good condition reached £2500.

One of the most striking items was a French Carousel or fairground horse c.1885 by Gustav Bayol of Angers, in somewhat worn and original condition which featured strongly during the two hours BBC Look North took to film their two minute news preview for the evening before the sale.  This created much interest and finally sold to a French buyer on the telephone at £1950.  It was obviously the larger horses that found the highest prices and a Leach horse c.1890 on safety stand but in need of new harness and horsehair reached £1050, while a 1920’s F.H. Ayres horse again ready for refurbishing found £800.  An extra large horse on bow rockers, fully restored by Anthony Dew bringing it back from the verge of destruction sold for £660.  A similar older horse in need of considerable surface treatment reached £850 and a French tricycle horse c.1890 sold for £420.  A similar Lines Bros tricycle dated 1920 found £210, and a Far Eastern reproduction, quite similar in design and appearance reached £90.

The rest of the sale had its moments of course, the starting section being dolls and teddies, well over half of which sold over the internet.  The best price was actually achieved after the sale, £2500 for a Tete Jumeau Bebe bisque head 24” high.  Another similar sized character doll by Kammer and Reinhardt reached £1350 while a French 19th century nine piece suite of dolls’ house furniture with printed lithograph papered surfaces rose to £740.

Elsewhere, a large quantity of Meccano parts including some rare pieces, housed in a 12 drawer cabinet sold for £620, while thirty four mainly early Dinky cars all in well playworn condition reached £360.  At the end of the sale were a variety of scale models and collectors items.  A single cylinder pillar beam engine found £600, while by the same amateur maker, a 2 ½” gauge live steam Caledonian Railway 0-6-0 tank locomotive sold for £1100.  Finally, an odd lot comprising seven metal Halifax and Huddersfield bus stop signs and a brass oval engine plate together realised £320.