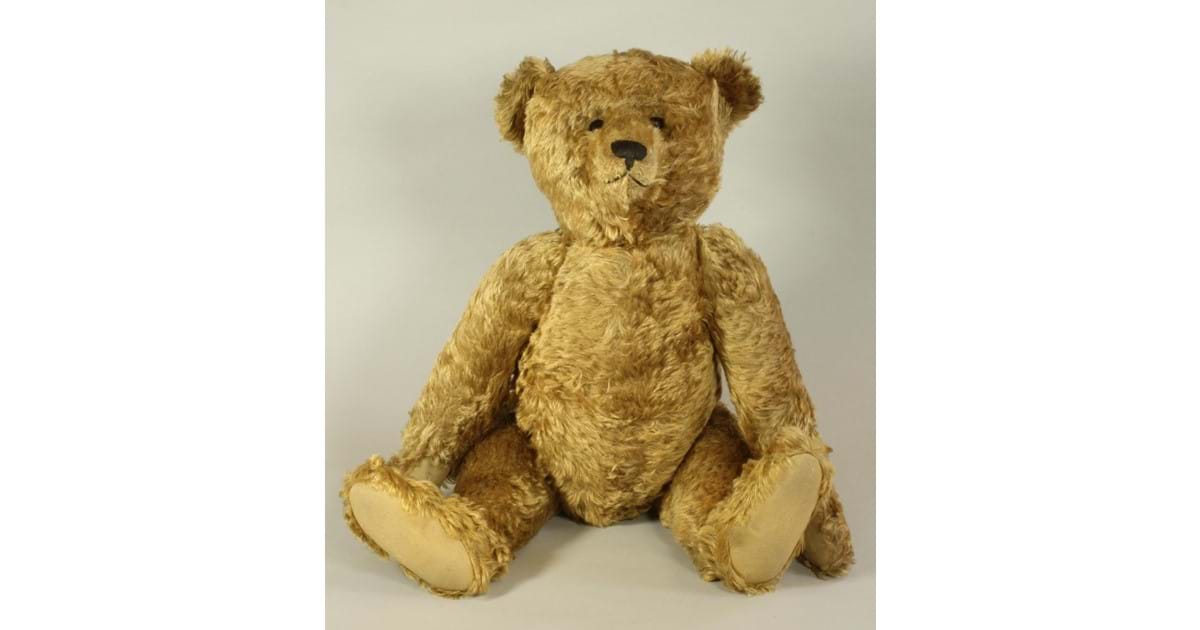 A successful auction sale of toys and collectables was held by Hartleys in Ilkley on Saturday afternoon September 26th.  Nearly £80,000 changed hands for 672 lots with only 10% bought in either below reserve or because no realistic interest was forthcoming.

Another statistic relates to the live internet bidding which obviously affects the rate of sale and therefore the chances of accurately estimating the time at which items are likely to come up.  Within the dolls nearly half sold items went on the net, while within the model railways it was little more than 10%.  The saleroom generally had a comfortable buzz of attendees at all times, even though the viewing was less hectic than normal.  Presumably therefore the net is justifying its existence in producing extra buyers.

The first session was devoted to dolls and teddy bears and this included the most expensive item in the sale.  This was a 24” Steiff teddy dated around 1910 and in the best condition for such an item that has ever been seen in these rooms.  The story goes that the original little boy owner was given it around 1910 shortly after which his father sadly died and the family fortune plummeted to subsistence level.  As this was the last (or only) present the little boy received during his childhood he took the greatest care of it.  It was his family from the Midlands who sold it to our owner 15 or 20 years ago and it is therefore the first time it has been seen on the market.  The price justified the special treatment by nearly doubling its lower estimate to sell for £5,800.

The only other teddy of note was an American bear of similar vintage but not in as good condition selling for £250.

The doll section included prams, books, dolls houses and furniture, and another of the big hitting lots.  This was an amazing Georgian style dolls house constructed in the 1990’s including three floors, a detachable front garden section and loads of detail such as wrought iron balconies and grates, and a copper roof.  The American lady owner, now deceased, who actually lived South West of Bradford had lovingly furnished it with silver and plated tableware, Venetian glass, Waterford chandeliers, carpeted and cushions hand embroidered in petit point and a full complement of kitchen equipment.  The “live” inhabitants included several servants and the kitchen rat.

Such a modern item was difficult to value but the love and attention lavished upon it alone earned the final price of £4,600.  Within the same market a collection of thirty pieces of dolls house furniture by Brian Masters sold for £560, and a cocktail cabinet in the form of a doll’s house by Maitland-Smith reached £460.

Within the dolls themselves the more notable prices mainly reflected expectation such as a bisque head Tete Jumeau 23” high selling for £660, and another 27” Jumeau, marked “1907” £800.  A small composition doll with a thin surface of wax to its head and probably much earlier than first thought, went for over its estimate to reach £1150, as did a bisque head, tentatively catalogued “possibly Gaultier” which rose to £3000.

The second session comprised miscellanea, construction toys, autographs, tin plate and diecast toys.  This started well with a Jennings & Co “Lucky Lady” fruit machine selling for £500, an unusual Shell combined petrol and oil can £320 and an early Doll & Co stationery steam engine £260.  The only celebrity lot which excited real interest was an autograph book signed by a number of theatrical stars including seven main members of the Dad’s Army cast, and this sold for £260.

Diecast stock always finds a ready market at the right price and nearly all of it sold on this occasion.  The higher prices were all paid for composite lots, the highest being £520 realised for sixteen Tekno articulated lorries, boxed, in excellent condition together with ten Tekno tractor unit kits (unboxed).  A strange price was the £320 paid for a composite lot including various Britains farm models together with two Budgie Models gift set boxes which included the wrong contents.  Presumably it will be possible to find the correct items in reasonable condition which puts a real premium on what is in essence a couple of empty cardboard boxes.

The final session was devoted to model railways and other transport items, and the backbone of this all came from an estate in South Yorkshire which alone fielded over half the section.  Much of the offering was in large composite lots in much less than perfect condition but this still produced keen interest and a rapid clearance to mainly buyers present in the room.

The O gauge section was where the individual more desirable pieces were to be found and the very first lot in the section was one of these.  It was a Scotland clockwork floor train advertising Caledonian Railways, a flimsy tinplate clockwork toy with a Cardean 4-6-0 locomotive and tender in mid blue.  It must have been a particularly early example and went ten times its upper estimate at £620.

There was a large number of pre and post war locomotives of various factories including a Hornby Royal Scot electric Pullman set at £360, a Bing steam powered 0-4-0 tank locomotive at £300, and a Hornby Princess Elizabeth locomotive and tender in LMS red, with all its paintwork peeling, still selling at £620.  A Hornby clockwork No 2 Special tender locomotive County of Bedford in GWR green sold for £320, and much more recently made, ten Lima bogie coaches, and various other items together reached £340.  Finally in this gauge, a rare and sought after Marklin 20v. Pacific 4-6-2 locomotive and four coaches probably made just before the war, sold for £1400.

The final section included various old collectables such as a Gibson London transport ticket dispenser which found £150.  The last lot was a 7 ¼” 4-2-2 locomotive chassis and boiler with lots of work to be done to finish it.  The day before the sale a regular buyer left (as was his want) a somewhat odd price of £451.  Immediately before the sale another punter phoned in a bid of £450 and so the regular won the day by a single pound.