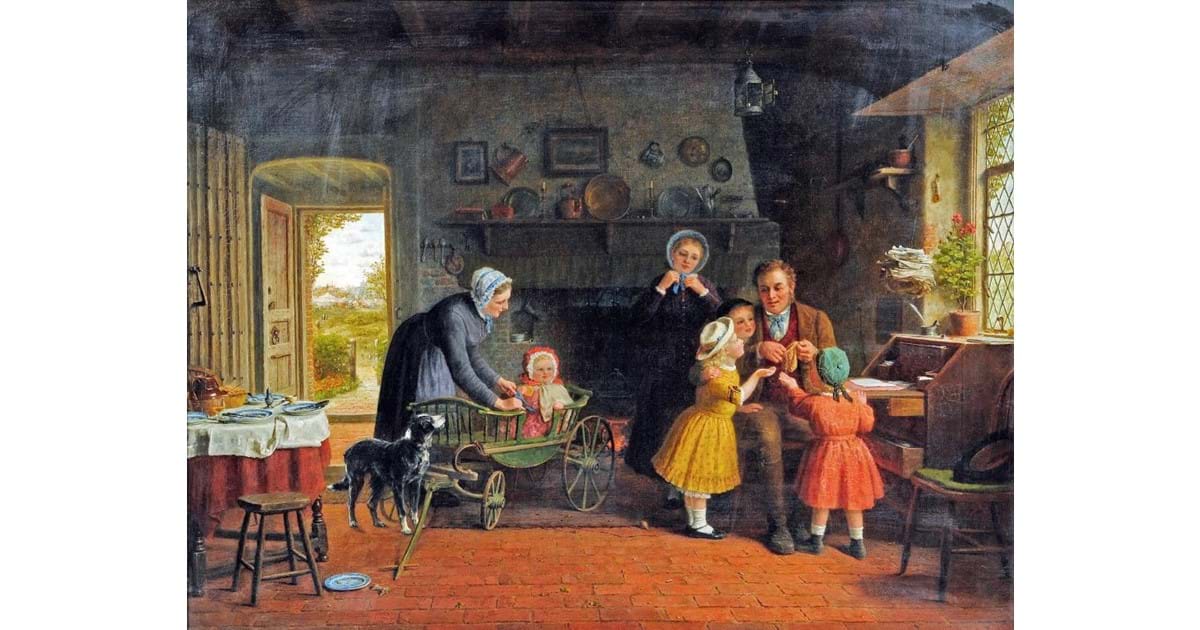 A collection of attractive items in every category at Hartleys sale in Ilkley, West Yorkshire on September 19th produced a relatively modest total of £234,000 perhaps because of the 22% of lots bought in as supply is still outweighed somewhat by demand.  Nevertheless, it was those items that sold well which formed the main impression of the sale.

The initial section devoted to ceramics started well with a Coalport tea and dessert service of 134 pieces reaching a double estimate of £860.  A typical KPM plaque of “Ruth gleaning” deserved its £900 final bid, while the largest item in the section by far, a massive Satsuma earthenware vase 35” high which trebled its estimate at £2,400.  Also from the Far East was a Chinese 19th century porcelain moonflask selling at £900.

A single medal offered, a Distinguished Flying Cross of 1942, was accompanied by no provenance of any kind which limited its price to £780.  The top place in the following coin section was taken by a Victorian 1887 gold five pound piece selling at £1,400, while the best sovereign was dated 1821 and found £410.

The jewellery section always attracts a particularly positive crowd, mostly ladies during the view days, although by no means all of them follow it through to the sale itself.  Nevertheless there was enough to produce eleven four figure prices, the best being an after sale bargain struck for a solitaire diamond ring of around two carats which found £5,000.  Two other solitaire rings of a similar size found £3,700 and £2,000, while a most attractive Art Deco style dress ring with a princess cut diamond surrounded by two open pave set borders sold for £3,600.  An emerald and diamond three stone ring found £2,300, a 9ct gold cigarette case of 106gms £900, and a Cartier gold coloured cigarette lighter estimated at £100 to £150 also climbed to £900.  A classic 18ct gold half hunter pocket watch of 1832 sold for £1000 and a George IV silver gilt verge pocket watch dated 1826 reached £1,600.

Finally in the morning session, the works of art were offered, a diverse category which ranged from an excellent William IV sampler worked by 12 year old Rebekah Smith in 1825 which sold for £560 to a possibly early 19th century wrought iron man trap, which was snapped up at £1,000.  In between were a selection of carved oriental ivories.  These included a 7” high Meiji okimono carved as a man with a rabbit on his knee, seated on a rabbit hutch, and a small boy next to him, which sold well at £3,000.  Another carved as an immortal holding a fruit and seated on a goat, 10 ¾” high reached £1,200.

The afternoon commenced with the annual offering of antiquarian books, and collectors items.  The best prices were realised by a Mathematical Manuscript from the College of Isaac Newton, Trinity Cambridge dated 1731 which found £2,100, and C. Julii Caesaris Quae Extant by Jacob Tonson dated 1712 in less than perfect condition selling for £2,700.  The most charming was an 1821 Picturesque Tour of the English Lakes by R. Ackermann with forty eight coloured illustrations, in very good condition which deserved its final price of £800.  A map of Nova Europae by Jodocus I. Hondius (1563-1611) also sold well at £850.

A smaller than usual picture section produced some fierce bidding on several items.  The Fish Pier, St Ives, an oil by Arthur Hayward found £2,500, a pair of Venetian Views by Alfred Pollentine of £4,200 and Three Allegorical Female Figures in Arcadian Landscape by Canadian Peleg Franklin Brownell, dated 1905 £3,000.  A view above Ilkley, “Milking Time Nesfield” by Herbert Royle sold for £2,900, a pair of genre interior scenes “Feeding the Rabbits” and “The Chess Game” by Robert William Wright £4,000, and another interior “Going to the Fair” by Frederick Daniel Hardy, reached the highest price of the day at £7,800, selling to Harrogate trade.

The best clock of the day was a massive oak and gilded brass table clock, with two train movement striking on a gong, 24 ½” high and this sold for £1,600.

There were ten four figure prices produced by the furniture section.  Two were from the 20th century, a strictly traditional breakfront inlaid mahogany bookcase, 73” wide, which found £1,550 and an adzed oak double bedstead with the mouse trademark of Robert Thompson which rose to £1,300.  A mid Victorian mahogany two stage bookcase 10ft wide sold for £3,400 and an early Victorian dining table with the range to extend to nearly 14ft long reached £1,900.  Georgian furniture included a mahogany chest on chest which found £1,300, a mahogany two stage bookcase with glazed upper section over drawers and oval panelled doors £1,020, a Welsh oak enclosed dresser of classic design and proportions 81” wide £1,500, a rosewood centre table with carved supports 49” wide £1,450, and an inlaid mahogany secretaire bookcase with oval panelled lower doors £1,150.