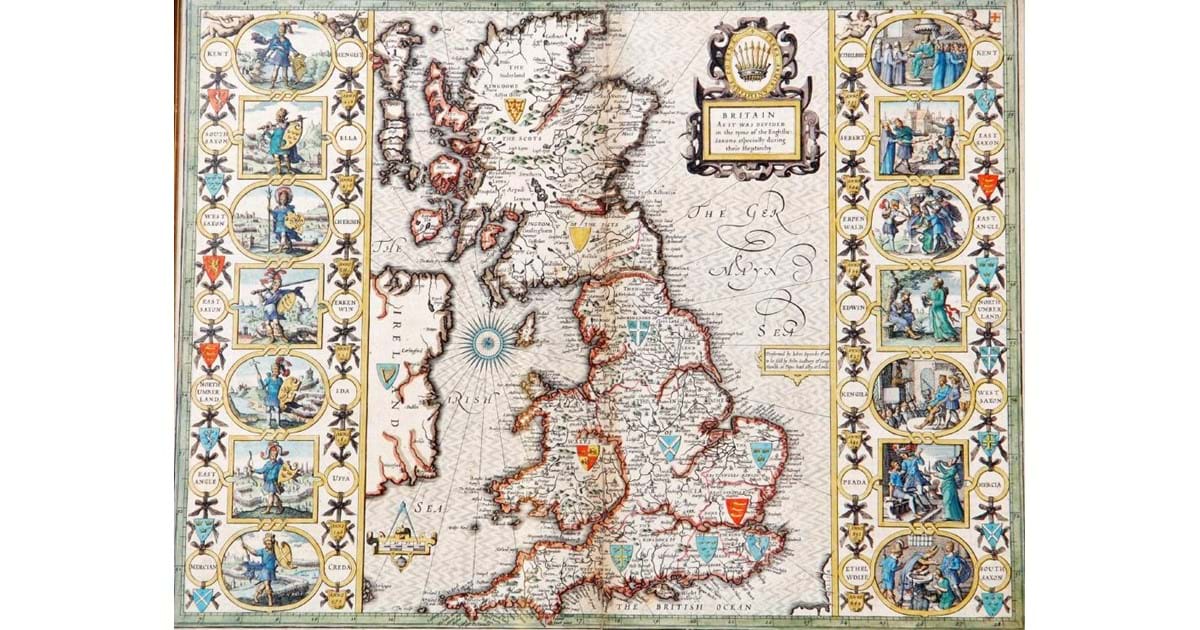 Once again the market prices and interest polarised around certain areas of Hartleys Autumn Sale in Ilkley on September 7th.  The sale total of £207,000 comprised 80% of the 700 lots on offer and of this nearly one third by value was purchased via the live internet connection into the saleroom.

The sale started with ceramics and glass, and two early lots were two Meissen porcelain chocolate cups and saucers with Augsburg gilded decoration which sold for a total of £1800.  Amongst the 20th century art pottery was a Winchcombe Pottery ale jug by Michael Cardew, inscribed with a motto, 8” high, which found £1700.

Both these were overshadowed by an Art Deco blue opalescent glass light fitting.  After the catalogue had been printed this was found to be an Edwin Lutyens design having started its life at Gledstone Hall, Skipton, and thus the pre-sale estimate of £150–£200 was totally ignored with a final selling price of £5000.

Silver was a slim offering this time but fielded a “Prince of Wales” clock dated 1981 from a limited edition of 210 to commemorate the Royal Wedding which sold mid estimate at £1250.  It was also modern items in the lead in the coin section where two 1974 South African Krugerrands sold for £1080 and £1100.

The jewellery section produced considerable interest and satisfactory prices, and quite early on, a very small diamond novelty brooch modelled as a galloping horse surprised the room at a price of £750.  More expected were various four-figure prices including a sapphire and diamond three stone ring £1450, a sapphire and diamond cluster ring £1900, a pair of ruby and diamond ear studs £1200, and best of all a two stone diamond ring of around four carats in total selling at £4200.  A further surprise was a small collection of six pairs of Victorian and later pendant earrings in ivory, coral, seed pearl and gold, estimate £150-£200 which shot away at £1200.

The final section in the morning was the offering of militaria, weapons and sporting items, and this was very well received particularly on the internet with a grand total exceeding the lower estimate total by 30%.  A rare French folding pinfire knuckle duster and dagger revolver reached £1500, a collection of six banners from the 1936 Berlin Olympics, originally owned by Zamfir Popazu who coached the 1936 Romanian boxing team sold for £950, and an officers full dress sabre tache of the 10th (Queen’s) Lancers 1834-55 complete with battle honours found £1150.  A collection of three lancer officer’s caps, all complete with swan feather plumes dominated the display and all sold well.  A 12th lancers cap with battle honours reached £3200, a 17th Lancer’s caps with honours missing found £3000 and a 21st Lancer’s cap in the most complete condition sold for £4000.

The jolliest item appeared in the sporting section, and this was a stuffed standing fox dressed in tweeds with a walking stick and a brace of partridges over his shoulder which charmed its way to a final price of £460.

The afternoon started with one of the main annual special categories devoted to books and maps, and several lots went well past their bottom estimates.  Most notable were Cary’s New Universal Atlas of the World 1813 sold at £2900, and “The British Colonies Their History, Extent, Condition and Resources” by R. Montgomery Martin (6 volumes in 12) with maps found £1200.  The best map was a Christopher Saxton “Southamtoniae” selling for £2400 while a John Speed “Britain …. In the Tyme of the Englishe Saxons” found £800.

Paintings are again a typical area where subjective “likes” drive up the price.  A watercolour “White Cottage” by Michael Morgan sold for £1100 against a pre-sale estimate of £200-£300, two Welsh scene watercolours by John Knapp Fisher reached £1650 and an oil painting by John Humphrey Spender “Blackwater Canal” was taken to £800.

The Yorkshire offering included a small and quirky mixed media, 7 ¼” x 9 ¾” by Brian Shields “Braaq” entitled “My Trike” reached £1000, while two well painted oils by Herbert Royle comprised “Autumn, Loweswater” selling at £1450 and “Picking Bluebells, Nesfield Woods, Ilkley” £3600, showing the difference in demand between his home and away canvases.

The works of art section included two lots of considerable interest.  The first was a Chinese semi-formal robe, early 20th century, in embroidered blue silk damask and this went to a six times lower estimate price of £850.  The other was a bronze and ivory figure of a young female dancer by Henri Fugere on a marble plinth, 17 ¼” high overall, and this reached £1200.

The best clock price was £1600 reached for a very stylish mahogany longcase regulator by Braithwaite, Wakefield, while in the same section a very small Continental musical box only 12” wide with drum movement went over eight times bottom estimate at £1200.

Top price in a small offering of garden and architectural items was a pair of early 20th century wrought and cast iron entrance gates, 125” wide overall, together with a matching single gate which rose to £2100.

The furniture section concluded the sale starting with a run of Robert “Mouseman” Thompson adzed oak items, mostly from the same owner, started with a 36” bureau which sold for

Also from the 20th century was an elegant carved walnut and bergere cane three piece lounge suite which sold for £1050, while a Chinese padouk wood stand described as c.1900, went well over estimate at £1200.  A Gillows style satinwood Davenport desk again c.1900 with sliding top and all the fittings reached £1100, while the only item earlier than this to achieve a four figure price was the final lot, a 17th century German walnut shrank or cupboard with well carved and moulded front which reached £1650.