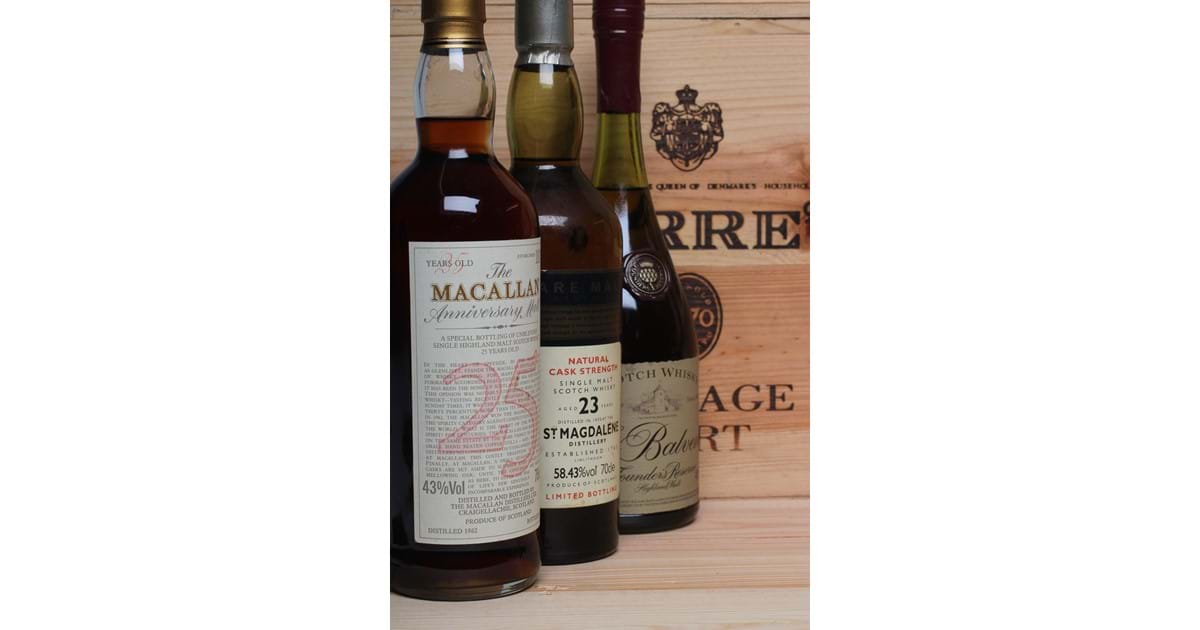 Our December Wine, Port & Whisky Sale has always been a wonderfully festive event; like a glass of mulled wine on a cold day, colourful, warm and full of alcohol. I hate to mention it, but of course Covid again came to play in this sale, keeping some of our fond regulars away and postponing the sale from November 27th until December 12th. But did it deter the market? Not at all. The lower estimate of the sale had been set at £47,000, but on the day the hammer came to rest just shy of £64,000, with an unsold rate of only 1% on the 456 lots helped by a huge online presence. Typically we would expect around a 40% purchase rate from online buyers, but in this sale we had 73.2% online, with another 10.5% via absentee bids. Leaving a mere 16.3% of purchases from in-room bidders; even with a room full of (socially distanced) clients, reflecting the sheer bidding intent of those sat at home hammering away at their keyboards.

The sale always starts with the miscellaneous section, which as usual was an eclectic mix of various bottles from the usual and non-descript to the excitingly ancient and fantastically rare. We only got as far as lot 11 when we had the first example of this: 1 bottle of Kweichow Moutai from China which fetched four times its bottom estimate at £320 - I am used to surprising prices from Chinese works of art, but this was my first in liquid form!  We saw more expectedly high prices amongst the rare and old bottles of Cognac, including 1 bottle of Remy Martin in a limited edition Centaure Baccarat cristal decanter at £360 and the highest price in the section from 1 bottle of 1800 Sazerac de Forge & Fils at an astonishing £2,200; which had been estimated at a hopeful £600-800. Honourable mentions go to a bottle of vintage Green Chartreuse which gained £270 and an unlabelled but obviously very early bottle of “possibly Cognac” which gained £110, proving the wine buyers do enjoy a gamble!

The miscellaneous lots were followed by a small but distinguished tobacco section. The peak being found in lots 75 and 77, both consisting of two part filled boxes of Cuban cigars, which stretched to £420 each, and lot 81 an unopened box of 25 Patagas Flor de Tabaco Habana cigars doubling its bottom estimate to gain £400.

Things began to get serious as we entered the Whisky section, a market that seems year on year to strengthen in its popularity and results. Of the 61 lots, 16 single bottles roared past £100, with three particular high notes being found with a bottle of Middleton Very Rare Irish Whiskey (yes Irish whiskey) attaining £440, 1 bottle of St Magdalene 23 year old rare malts whisky which flew up to its top estimate of £800, and 1 bottle The Macallan 25 year old Anniversary single malt Whisky which topped the section and the sale at £2,500; even whilst missing its presentation case.

The champagne section added its usual sparkle with 17 single bottles of the 29 lots rocketing over the £100 mark. Of the 8 encounters we had with Moet et Chandon, prices peaked with two results at £180 for a bottle of 1982 vintage and another from 1990. Six consecutive single bottle lots of 2008 Louis Roederer Cristal Champagne produced a collective total of £860, a 1975 bottle of Bollinger produced the best single bottle price of the section at £190 and the best price of the section came from a 2 bottle mixed lot of 1943 Moet & Chandon Dry Imperial Champagne and 1941 George Goulet champagne, which tripled the bottom estimate at £300.

We then made our way to Spain with a strong 53 lot Port section, made of single bottles, mixed lots and large cased batches. Of course high price form was found within the latter with £420 being made for 12 bottles 2003 Taylor's, £440 for 6 bottles 2007 Dow's and £460 6 bottles 2011 Dow's. Though the most excitement was found in single bottles where true vintage (or even antique) nature shone through, when 1 bottle of 1935 Sandeman made £380 and a truly ancient bottle of 1854 Ferreira, made another £320. Although it is great for these bottles to be kept for another generation, I would love to know how they taste.

Rumbling into the last sections of the sale and the French Burgundy, we had 12 bottles 2005 Batard-Montrachet grand cru in its case peaking over the top estimate at £1,050, 2 bottles 2004 Meursault, Les Tessons getting an impressive but expected £320, and 3 bottles 1999 Chateau Haut-Brion gaining a whopping £560. Some of the single bottles of Burgundy also impressed with 1 1963 Chateau Haut-Brion reaching £170 and 1 1959 Clos-Vougeot, Chateau de la Tour finishing at £110, showing as ever power in a good vintage. However, the peak of the section came from a much “younger” bottle, 1995 Echezeaux, Grand Cru, Henri Jayer, which pushed past the top estimate to make £1,700.

As always we finished the sale with the Bordeaux, starting with the white and a wonderful bottle of 1965 Chateau D'Yquem, Sur-Saluces Sauternes which (much to a happy vendor’s surprise) topped out at £260. Moving onto the reds we had 10 bottles 2004 Grand vin de Leoville fetch £800 and 12 bottles 2005 Grand vin de Leoville, Saint-Julien-Medoc reach up to £1,200. But once again the single bottles with some of the greatest age created the biggest stir seeing 1 bottle 1953 Chateau Cheval Blanc, Avery, Grand 1er cru reach £240, 1 bottle 1922 Grand Vin de Chateau Latour leave its estimate in the dust at £420 and 1 bottle 1933 Chateau Lafite Rothschild, 1er Cru Classe getting to its reserve of £600. But again a relatively “young” bottle of 1990 Petrus, Pomerol Grand Vin made the second highest single bottle result at £2,250.