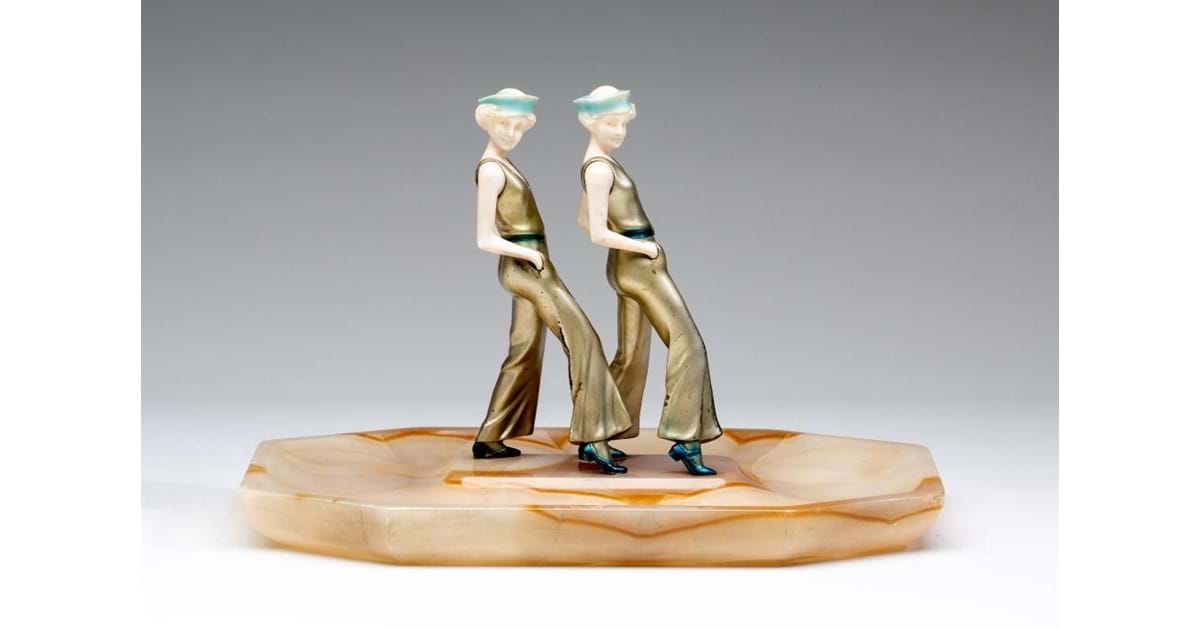 Probably the most mixed selection of different items to be offered in a single sale represented Hartleys Autumn Fine Sale in Ilkley on September 4th.

Starting with Oriental ceramics, a signed Satsuma 3 ½” bowl trebled its lower estimate to reach £1650.  A cricketing interest Doulton Lambeth stoneware jug featuring various players sold well at £800, and a large Wemyss pig 16” long from the most famous Scottish pottery went within estimate at £850.

It is always difficult to be certain how current commodity prices will affect an auction but certainly silver is at a current high.  In this section a most attractive pair of Arts and Crafts candlesticks with blue enamel decoration reached an expected £3000, an ornate William IV four piece tea and coffee service went above estimate at £1150, and a Charles II seal top spoon dated around 1665 achieved £1150.

For the same reasons gold coins sold for more than catalogue estimates, prepared when gold was at a lower price.  Two 2016/17 gold proof coins, each weighing 1oz reached £2050, and a set of three 2016 Commonwealth coins for the Royal birthday found £2600.

The best watch to start the jewellery section was a Heuer chronograph dated 1949 which found its lower estimate of £1200.  The top price in the jewellery was an above estimate £4000 for a solitaire diamond ring of around 2cts with diamond set shoulders.  Other prices included an Edwardian diamond set bow brooch £1400, while a ruby and diamond three stone ring and a diamond set wedding band by D.J. Morris both achieved £1050.

At this time of year there are usually weapons and field sports items on offer.  A deactivated Mauser broom handle pistol comfortably exceeded estimate at £950 while a rare 28 bore side-by-side ejector shotgun and case sailed well past to finish at £2900.

In the generally unclassifiable works of art section, the highest price went to an Egyptian carved marble head, its only provenance being good enough having been purchased in Egypt in 1917 and this sold for £4400.  A penny farthing bicycle succeeded in doubling its top estimate at £3200.  The catalogue cover picture was a positively part Art Deco bronze and ivory group of two girls by Otto Poertzel 5 ¾” high, and this left the estimate standing to sell at £3200.

Books and maps are also something that feature in the Autumn Sale and 140 lots were offered on this occasion.  A John Wesley autographed letter dated 1761, in fragmentary state reached £900, six volumes of Charles Dickens, five of them 1st editions achieved £850, and The Lepidoptera of the British Isles in eleven volumes £1000.

Garden items, clocks and furniture finished off the sale, with a carved sandstone mask “The Green Man” leading the first part at a price of £1050.

A brass water wheel industrial clock driven by ball bearings sold well at £1450, and a handsome longcase clock with eight day movement and brass dial by J. Whitehurst, Derby raced past its estimate to find £3400.

Finally, the actual furniture did not perform as it was hoped from tiny chinks of daylight discernible in the last few months.  Notable prices were a Victorian gilt gesso pier glass, 73” high, £1300, a late 17th century oak dresser base £850, and a 17th century oak low dresser incorporating nine drawers £2900.