A Summer Sale with Mixed Results 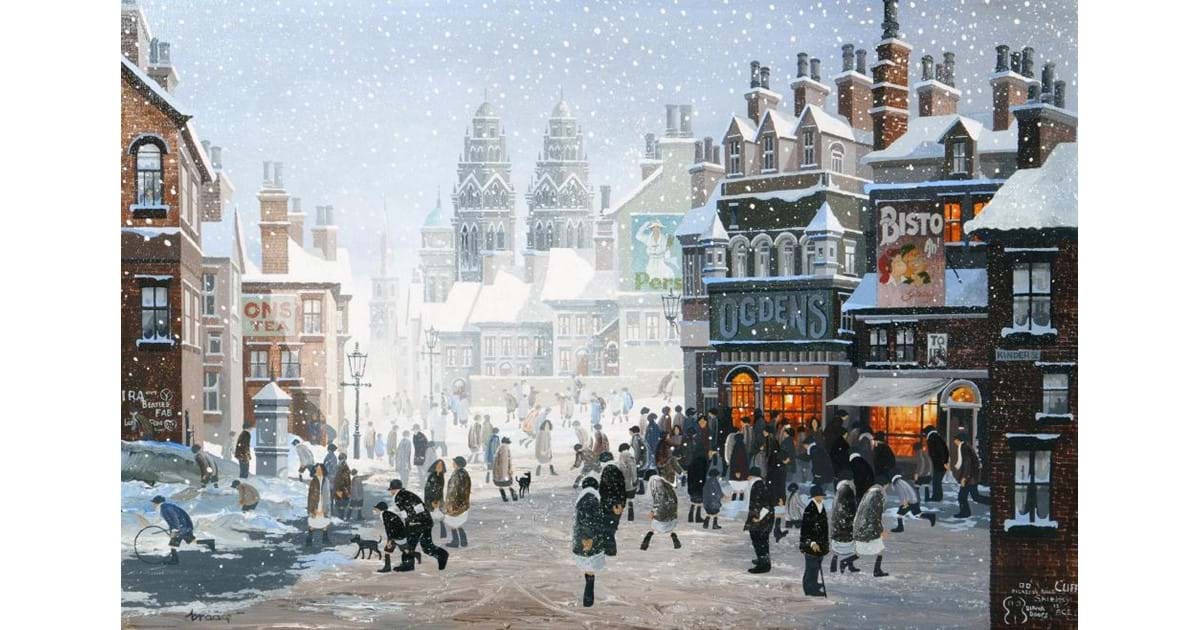 The pictures showed a much better overall performance, partly no doubt because of the comforting lack of trade entries on offer.  The best result related to two typical oils by Brian Shields or “Braaq”.  The first, a winter urban scene with figures, snow and graffiti reached £19,500, an auction record price for this artist.  The record lasted a matter of minutes until the second offering from the same owner, and bought on the phone by the same purchaser.  This was a larger urban scene, still in snow, entitled “Can’t Come Out today ‘cos I wet the bed last night”, which sold at £30,000.

Another longer established Yorkshire painter Herbert Royle also brought home the bacon.  His prices reached high levels ten years ago but later slipped heavily down.  The levels have gone back up again in the last eighteen months or so not to the highest level, but reassuring in the current economic climate.  Of five examples, four from one owner, four were also purchased by the same local private collector.  The highest result was a lovely view of two girls amongst the bluebells of Nesfield Woods above Ilkley, which sold for £7,500.  A view of Bolton Priory from the North found £5,500 as did “Wharfedale Pastures, Near Beamsley”.  Royle’s Scottish Scenes tend to be sketchy and lacking in detail as he made the most of a brief holiday in the Western Isles and they tend to go for less money than the local scenes.  However a beautifully furnished view of Loch Cravadale – North Harris deserved its price of £2,600.  A sketchy view of Loch Torridon also found £1,500.

Elsewhere in the pictures a very large unsigned portrait of a Victorian gentleman and his wife, 88” by 62 ½”, found £1,200, and a lovely interior by Gilbert Scott Wright “The Favourite Hounds” depicting an ailing old man by the fireside with four foxhounds being brought in obviously to cheer him up, went to £1,700.

The start of the sale was a relatively small ceramics and glass section which nevertheless had some notable moments.  Chinese interest both from the United Kingdom and Asia on anything oriental tends to produce confusing results.  A large pair of late 19th century moon flasks estimated at £300 - £500 reached £1,500, and a Yixing redware teapot with bottom estimate £100, found £1,600.

Normally the potaholics like their ceramics to be in perfect condition and any damage drastically affects the price.  Two considerably restored and in parts deficient items however went well above estimate.  A large Meissen porcelain ewer with relief figures and animals nearly doubled its top estimate selling at £5,600, and a Goldscheider figure after J Lorenzl of a young female dancer, produced a similar result at £3,000.  Auctioneer’s favourite was a 16” pair of Wayte and Ridge earthenware Vanity Fair political figures of Gladstone and Disraeli which sold for £740.

An extended coin section commenced with a boxed set of four Crimea war medals.  These were presented to Major Phillip Dickson, Royal Artillery, and comprised the Legion D’Honneur, 1854 Crimea medal with three clasps, 1855 Crimea Medal and Turkish Order of Mejidie, with matching set of miniatures.  The captain’s family were the consignors and this doubtless helped the set to a final price of £2,700.  Most of the coins came from a single deceased estate, the property of a watchmaker over the hill in Silsden.  The estate also included several gold and silver pocket watches and various other items in the sale, together with literally dozens of pocket watches which have appeared in batches in successive general sales at Victorian Hall for several weeks.  The coins represented a full spectrum of ancient Greek and Roman, early hammered British coinage, Georgian silver, and Georgian, Victorian and later gold.  Much of the offering suffered from poor condition and over cleaning.  However prices included a William IV 1827 sovereign at £360, two George III guineas at £350 each, an Elizabeth II 1980 proof set of four gold coins £1,600, an Edward VII two pound piece £360, a Victorian 1870 Australian sovereign at £330, and most attractive of all, a Charles I lozenge shaped 1646 half crown struck when Newark Castle was under siege, which sold for £1,100.

The jewellery which completed the morning session included the regular trade entry part of which was totally shunned, but the remainder produced very useful four figure prices.  For instance, a diamond solitaire ring of approximately 0.9 carats in size reached £1,600, a sapphire and diamond cluster pendant and chain found £3,000, and a high quality solitaire diamond ring of 1.09 carats reached £4,700.

The June sale in Ilkley these days includes  a section devoted to garden and architectural items and eighty five lots of stone, artificial stone, cast iron and marble spilled out from the saleroom’s loading bay into the yard.  They included a large sandstone water trough 55” wide selling at £1,200, a Victorian cast iron garden seat in the Arched and Rayed pattern, also at £1,200, a composition stone sundial with modern copper dial and gnomon sold well at £1,150, and an early 19th century marble fountain bowl quadrupled its bottom estimate at £1,250.  A late Victorian pine witness box with brass hand rail which had dominated the auctioneer’s other job for part of his twenty nine years as a magistrate, was dispensed summarily at £460.

The final part of the sale, the clocks and furniture in spite of the reduced selling rate referred to above, still produced its moments.  The best clock on offer was a 19” brass skeleton clock which because of its unusual single fusee movement trebled its lower estimate to find £1,900.

An item of furniture usually the Cinderella of its section, and so often in abandoned condition or worse a mere shell pressed into some other use, is the late 18th century square piano.  In this sale however there was an example by Broadwood dated 1792, in satinwood banded mahogany case and in full going order having been restored by Knowles of York in 1987.  The result was a just and satisfying final bid of £1,950.