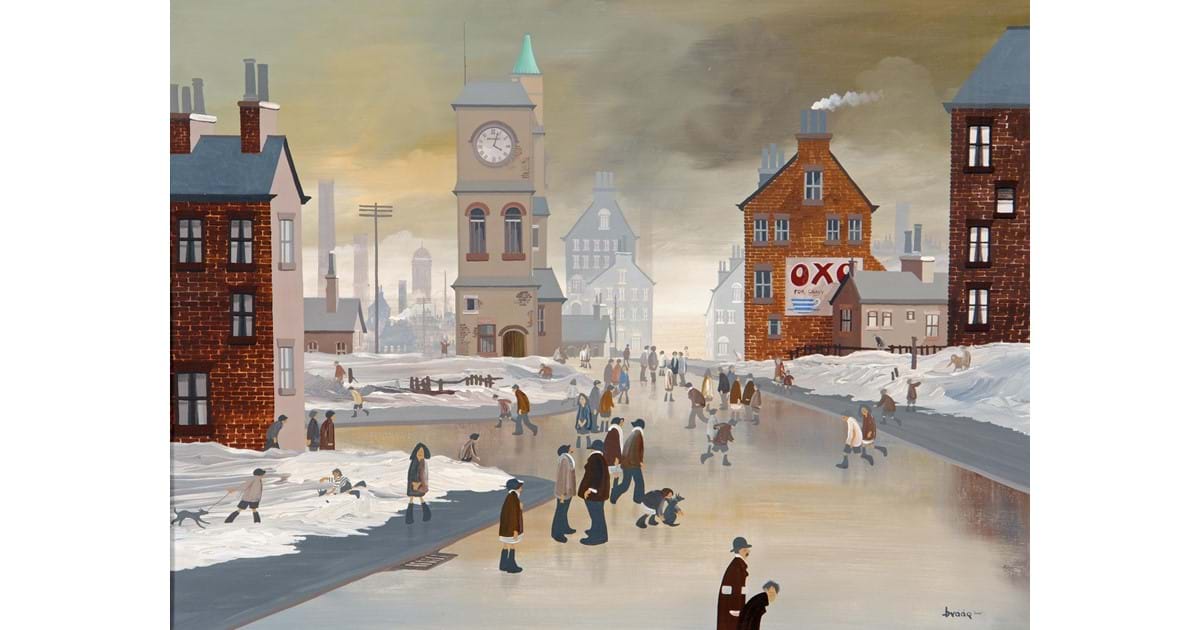 “Braaq” was once again the buzz word at Hartleys quarterly Fine Sale on March 27th.  As winter and snow stuck stubbornly like a limpet to what was laughingly named “the Spring Sale”, six examples of Brian Shields work took £62,000 or over a fifth of the sale total of £282,000.

The works, in a style somewhat reminiscent of L.S. Lowry but with more quirkiness and often a more obvious link to specific parts of the North, were entered by three different owners and claimed six of the eight best prices in the sale.

The first, entitled “The First of Many”, a typical snowbound View of a Leeds City Street, reached £10,000.  Next was “Hey Up Shieldsy You’ll Kill it”, a busy frozen lake scene with the boy artist climbing a tree after a cat, selling for £14,000.  The same price was realised for “This’ll Cool ‘er off”, a snowy cityscape with the boy artist and his dog in a snowdrift in the left foreground.  Then “The Band Stand”, the only summer time view with a well populated park outside a smoky cityscape, and smaller than the previous three sold for £7000.  Then a view of a city pub with a prominent Tetley’s Bitter sign took us back to winter and a price of £12,000.  Finally, the smallest of the offering at only 11” by 9”, a more intimate snow scene of a church entrance with just two figures doubled its upper estimate to sell at £5000.

The only other painting to compete with these was another Yorkshire offering, by Ilkley’s own Herbert Royle, with a view of the River Wharfe Near Farfield with Beamsley Beacon beyond which deserved its final bid of £5000.

Another section which created a huge amount of pre-sale interest, without obviously the same financial result, was the annual weapons and sporting section finding buyers for 91% of the lots on offer.  Of the four figure prices achieved, the best, and also the biggest surprise was the £6000 achieved for a handsome 19th century Indian Shamshir or curved sword, beautifully decorated but in need of repair, and which nevertheless represented twelve times its presale top estimate.

A very eye catching Japanese early Edo period full suit of armour including helmet and gattari (or flag pole holder worn at the back), in generally complete condition with some replacements and losses, sold for its lower estimate of £2000.  A set of three medals associated with the Indian Mutiny and awarded to Major General John Dawson, who made a daring escape with his family down the Ganges, sold for £2,500.

The start of the sale was devoted to ceramics, and the room immediately showed that buyers meant business as the first five lots comprising a total of eleven items of Royal Copenhagen mid 20th century Flora Danica dessert ware from an Ilkley estate produced £1690 between them.  Indeed bids on the book showed that further pressure from the room on these lots would have been comfortably outgunned.

Shortly afterwards, a finely painted Berlin porcelain plaque depicting “Psyche at the sea” and unusually large at 16 ¼” by 12 ½” comfortably sailed past its upper estimate to sell at £6,400.  The relatively small glass section was book-ended by two pieces of Lalique.  A blue opalescent “St Francois” pattern vase 7” high reached £1300 and a “Soleil” pattern semi-spherical plaffonier found £1100.

The silver and plate section was underscored by a fascinating collection of decorative items entered by an owner from the North West edge of Bradford.  They included a handsome pair of old Sheffield wirework side urns and covers with blue glass liners, 13” high, selling for £1250, and a George III tankard by Thomas Haytor, stamped London 1809 and weighing 26 ½ ozs, which found £1200.  A George IV decanter stand dated 1823 with four glass spirit decanters reached £1300, a gentleman’s coromandel wood dressing case with all its silver mounted fittings £1250, and a small Russian campaign set in excellent condition and probably never used, £1000.

Also in the silver section was an Arts and Crafts goblet by Omar Ramsden dated 1927, 4 ½” high and weighing 5 ¾ozs which realised £1250, and a Charles II trefid spoon stamped for Marmaduke Best, York 1678, later engraved with a monogram, which doubled its estimate at £2,700.

The fine art section, inevitably an amalgam of different commodities and skills, usually waits for a surprise or two.  This occasion did not disappoint with the first lot a set of three George III bronze wool weights, each to weigh 7lbs, and discovered in a box of oddments waiting under the table of a January general sale producing huge interest and a five times upper estimate price of £3800.

The other main interest in this section centred around a small collection of Chinese damask and embroidered items of clothing, and a view of the names on the telephone bid list more than hinted at where the main source of the prices would be.  In the event, two items stood out, a yellow silk damask skirt embroidered with butterflies and moths within flowers, together with a woven and embroidered silk robe reached £2,100, and a Chinese symbol robe in blue Kossu silk woven with dragons and cranes in flight which found £4400.

The final section devoted to clocks and furniture, whilst only providing a few four figure prices, still managed encouragingly to clear 90% of the stock offered.  A table polyphon playing 19 ¾” discs found £1500, a Victorian mahogany library table reached £1350 as did an extending mahogany dining table with drop leaves, 9ft long in total and provided with the maker’s (A D Narramore) original watercolour drawings of the item.

The most attractive furniture lot was a delightful early 20th century pair of satinwood and floral marquetry gueridons of two tier circular form which in retrospect well deserved its final price of £2,400.