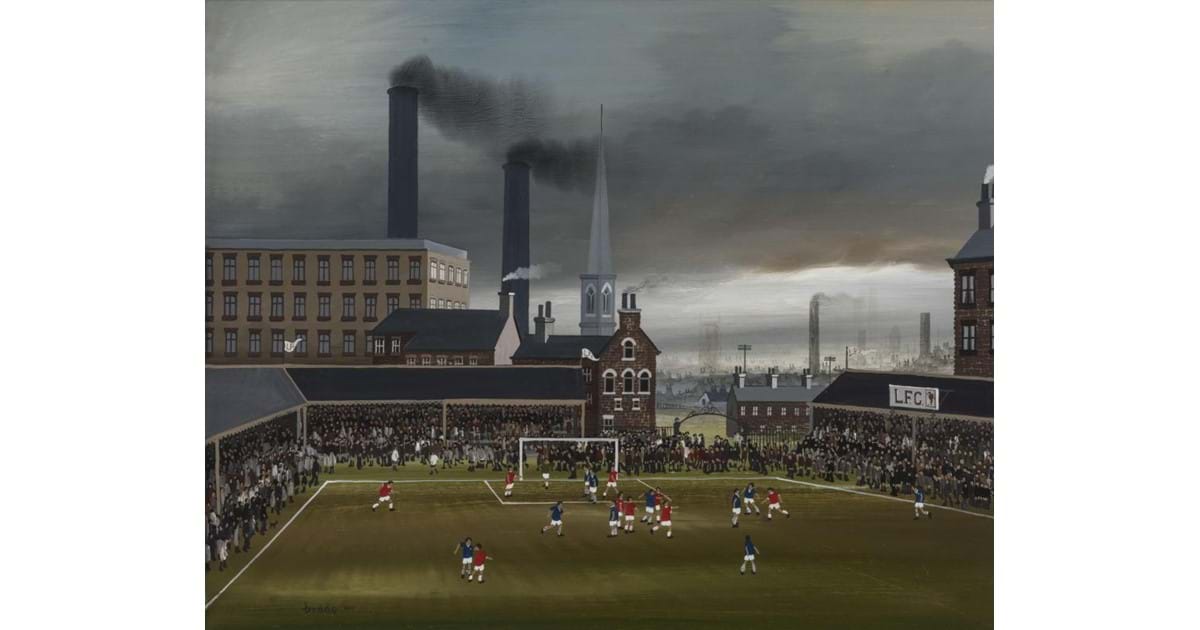 A very successful Spring Fine Sale was staged by auctioneers Hartleys in Ilkley on March 22nd when nearly £260,000 was paid in total for a catalogue of 678 lots with just 20% bought in.

Private buyers and dealers attended in force, particularly for the jewellery and picture sections, and purchasers via the live internet were restricted to just 32% of the total of lots bought.

The best prices occurred in the Yorkshire picture section with two oils by Brian Shields (Braaq) performing well above expectations.  A cricket match reached £13,000, and a football match in Liverpool rose to £21,000.  Another more standard Braaq of many figures within an industrial landscape sold for £5,800.

Also painted in Yorkshire were a typical snowbound scene by Peter Brook selling for £3600, while a coastal scene with fishing boats by Henry Moore found £2300.  Elsewhere, an extensive Scottish highland landscape, only attributed to Alexander Nasmyth was obviously regarded as the real thing  as it rose to nearly seven times bottom estimate to sell for £4000.  A stormy haymaking scene by William Kay Blacklock, sold for £1900, a pair of outdoor genre watercolours by Filippo Indoni £1400, and a typical print by L.S. Lowry entitled “Mrs Swindell’s Picture” reached £1200.

The morning session started with ceramics and glass and included an extensive Meissen dinner service of fifty four pieces which found £1100, a Wedgwood Fairyland lustre bowl designed by Daisy Makeig-Jones, selling for £2300, and a series of ten 1950’s Royal Copenhagen figures of children which sold for £1800.  The biggest surprise was a collection of four Georgian opaque twist wine glasses, estimated at £100 - £150 which shot up to £950.

Silver was a little more prosaic, and two contrasting lots were a 1970’s service of forty four items of cutlery including stainless knives selling for £1100, or a gross figure of £15 per ounce, while a Queen Anne Britannia Standard mug dated 1710 reached £1000 or £113 per ounce.  Other prices included a George I footed salver £1950, a pair of George II mugs £1550 and a tortoiseshell and applied silver mounted correspondence box which quadrupled its lower estimate at £1450.

Amongst the jewellery, a traditional three stone diamond ring of nearly 4 carats in total sold for £6000, while a solitaire diamond ring with brilliant cut cushion stone of 2.5 carats rose to £7,500.  An emerald pendant in diamond set surround reached £1300 whilst a very pretty Victorian pearl and diamond pendant/brooch sold for £1200.

The final section for the morning was devoted to weapons, militaria and field sports, 120 lots accumulated in the last six months.  The collection was led by a double barrelled pinfire pistol by Horsley in excellent condition which reached £2000.  Just behind it was a Volunteers Brown Bess flintlock carbine by Watkin dated c.1770, selling for £1950, an American flintlock Kentucky rifle found £1650 and a late 18th century flintlock holster pistol sold for £1100.  One unusual part of this section was an extensive collection of bayonets amassed by the late Roger Evans, 87 in all offered in 35 lots which collected a total of £7,440.

Small works of art and clock sections in the afternoon included a bronzed terracotta figure of Oceanus c.1900 on a marble plinth which defied its pre-sale estimate of £150-£250 to reach £1850, a Chinese cloisonné bowl, selling for £1000, a Josef Lorenzl art deco silvered and cold painted bronze dancing figure 5” high £1000, and a lovely Old English brass hook and spike lantern clock c.1700 which rose to £2100.

The first part of the furniture, devoted to the 20th century was totally dominated by eleven lots of Robert Thompson “Mouseman” adzed oak pieces.  These all went to excellent prices and included a fallfront bureau at £5000, a high backed smoking chair £1200, a set of eight lattice back chairs £2300, two standing corner display cupboards £2100 each, a 54” refectory table £1450, a small open bookcase £1350, and a panelled bedside locker £1950.

Of the remaining furniture it was the Georgian prices which took all the interest and determined bidding.  An exception to this was a most unusual and beautifully carved Georgian style partners desk.  It was made around 1900 and what set it apart was its overall oval shape.  The high price of £1600 seemed reasonable in retrospect.

A Regency painted pine “waterfall” open bookcase reached £1050, and the sale was topped by several excellent Georgian pieces from a Harrogate consignment.  The stars of this were an oyster veneered chest of drawers c.1700 which reached £2500, an inlaid walnut escritoire or bureau a abbatant, again early 18th century which was knocked down at £3000, and an early Georgian walnut chest on stand which closed the sale at a final price of £5000.